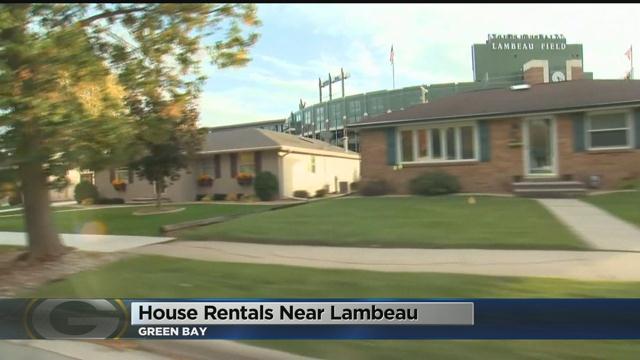 She visited Shadow Lane which sits in the shadow of Lambeau Field.

Some of the houses on Shadow Lane rent for thousands of dollars on game day.

GREEN BAY, Wis. (WSAW) -- Many of the homes along Shadow Lane in Green Bay have transitioned from owner-occupied homes to party houses. Their backyards face Lombardi Avenue and Lambeau Stadium, but some people have been living in the shadow of Lambeau for years.

Harold Zastrow has live on Shadow Lane for 30 years.

“Seen Lambeau Field built quite a few times,” he recalled while giving a tour.

He's one of the last family owned homes left on the lane. But he knows more than anyone Shadow Lane isn't what it used to be.

“It's not a neighborhood anymore like it used to be. You used to be able to get together with neighbors, have a cookout together,” he shared.
His garage is covered in green and gold, but the basement-- he said that's his spot.

And just down the street Shadow Lane looks a little different.
“It's where the new sidewalks start and the old sidewalks end,” explained new home owner David Rasmussen.

He owns the newest home on the street. Complete with open windows, televisions in mirrors and of course, a view like no other.

“It kind of speaks for itself. It's amazing,” he said.

Very different than a lot of homes on the street, but one thing stays the same-- tradition.

Something Harold is hoping to keep, so he's moving.
“Is it going to be hard to let go,” asked NewsChannel 7's Hannah Anderson.

“Oh, it's going with me,” Zastrow said while smiling.