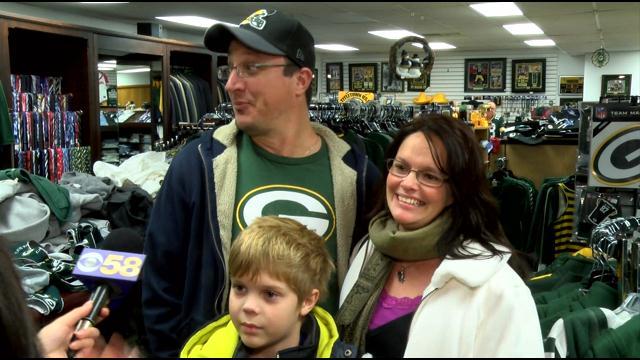 While many shop at big box stores on Black Friday, many Green Bay Packers fans stopped by the Green and Gold Zone to grab coats, cheese heads, even something for the little ones.

\"You got to be prepared, you got to have your green and gold on,\" said Wade Zimmer, a lifelong Packers Fan.

As fans gear up for Sunday's game against the Patriots, one woman found herself-- in enemy territory.

\"There's a lot of green and a lot of gold in this store,\" said Jennifer Zimmer, Wade's wife.

While her husband, a Wisconsin native, bleeds green and gold, Jennifer, a Vermont native, is a lifelong New England Patriots fan.

The Zimmers drove some 1300-miles, all the way up from their home near West Palm Beach, FL for Sunday's Game between the Packers and Patriots at Lambeau Field.

\"79-degrees when we left, Tuesday morning to come up here,\" recalled Wade, \"so the temperature has been going down in the truck ever since.\"

Despite being surrounded by Packers gear at the Green and Gold Zone-- Jennifer didn't seem to mind.

\"It's almost Christmas time, I like to buy him things for Packers, so it's a good thing,\" said Jennifer.

The Zimmers were all smiles as they browsed for some new items to add to Wade's collection, but Jennifer and Wade's son told us-- Mom and Dad are serious about their team.

\"It's been basically crazy! Both of them rooting for two teams, watching them, wondering who's going to win,\" said Ian Zimmer.

There's a good reason for the couple to be fired up about their teams.

\"There's a lot of people who are looking at this as at least one of the potential Superbowl match ups out there,\" said Gary Anders, owner of the Green and Gold Zone.

Win or lose-- this is a trip, their family will always remember.

\"This will be her first trip to Lambeau, and this will be my third,\" said Wade, \"it will be fun regardless of what the outcome is.\"

The Packers and Patriots face off Sunday, the game kicks off at 3:25 PM and will air live on CBS-58.