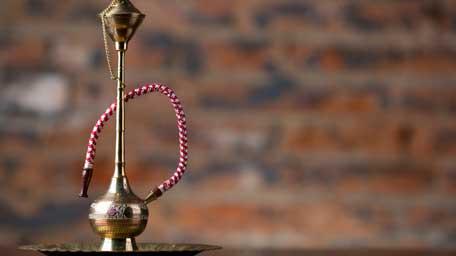 Smoking a hookah, or water pipe, may seem like a safe alternative to cigarettes, but a new study suggests that might not be the case.

As cigarette smoking rates fall, the popularity of hookahs is on the rise.

However, a new analysis puts the notion of hookah as safer than cigarettes in doubt.

The University of Pittsburgh School of Medicine found that smoking hookah exposes the user to 125 times the smoke,  25 times the tar,  two-and-a-half times the nicotine,  and 10 times the carbon monoxide  compared to a cigarette.

The researchers looked at the results from 17 previous studies to come to the conclusion.

Here's why this is important the CDC says hookah smoking is slightly more common among high school students than cigarette smoking.

The Pittsburgh researchers admit its difficult to compare the two forms of smoking, since people generally smoke multiple cigarettes in a day and hookah smokers may only use it a few times per day.

Ultimately, they believe the practice needs to be examined more closely than it currently is.

The full report is in the January - February issue of the journal "public health reports."