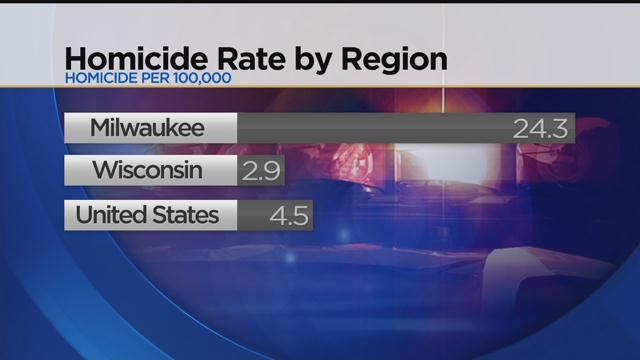 It's raising eyebrows alright. The simple ways "not" to get shot in Milwaukee.

The chief said homicide rates for six of the last eight years have been the lowest in a quarter century.They're still trying to figure out if last year's spike is a trend or just an outlier. The chief's words brought laughter at some times but still has many people talking.

Some fatal, but most were not:  778 people were shot in the city of Milwaukee last year; a number that's increased 61 percent in the past 10 years.
Thursday Chief Ed Flynn said while the city is working on the problem there's things you can do to ensure you aren't a victim.

The numbers are staggering.
In 2015, Milwaukee's murder rate was more than eight times that of the state of Wisconsin and five times more than the entire US.

Here in Milwaukee, the large majority, 82 percent of those people, were shot.

"The propensity to sin is equally distributed among all races and social classes and ethnic groups," said Chief Flynn,

While Flynn says anyone can be the shooter crime data revealed Thursday shows the person in front of and behind the gun are very similar.

While discussing the city's plan to use citizens academies, chaplain programs and federal help to stop the problem Flynn had some advice for residents.

"There's four simple rules to not being shot in Milwaukee:do not be part of crime gang or crew, don't be a drug dealer, don't illegally carry a gun and if you are in an argument with a stranger, if they have been arrested more often than you've been arrested; concede the point," he said.

But with thousands of guns taken from criminals every year Flynn, along with Mayor Tom Barrett say this no laughing matter.

"The cavalry is not coming; its up to us," Barrett said.

This Sunday, he will be at three local churches for the 12th annual Ceasefire Sabbath: