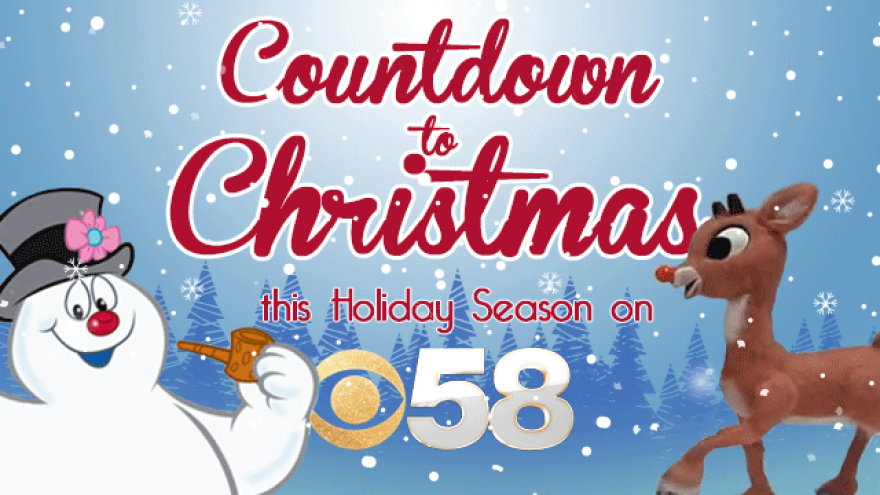 Below is the current holiday schedule for CBS 58 and The M. All programs, dates and times are subject to change.

Rudolph, The Red Nosed Reindeer --The navigational prowess of “the most famous reindeer of all” will again illuminate Santa Claus' way into the Christmas season on the CBS Television Network.  (Originally broadcast on CBS 12/8/72, after an eight-year run on another network.)

The special, narrated by Burl Ives, who is also heard as the voice of Sam the Snowman, is a musical story based on the popular song of the same title by Johnny Marks.  It recounts the tale of a shy reindeer whose Christmas spirit is dampened because his shiny nose has made him the laughing stock of all Christmasville.

Pursued by an Abominable Snow Monster, inhabitants of Christmasville flee to the island of Misfit Toys in the Arctic wilderness where Yukon Cornelius, a prospector they meet along the way, comes to their rescue.  Returning to Christmasville, they learn that bad weather may cause Christmas to be canceled.  But Rudolph's headlight — his illuminated nose — saves the “foggy Christmas Eve” by serving as a beacon to guide Santa's sleigh.

Marks composed seven additional songs for the special:  “Holly Jolly Christmas,” “Silver and Gold,” “We Are Santa's Elves,” “We're a Couple of Misfits,” “Jingle Jingle Jingle,” “There's Always Tomorrow” and “The Most Wonderful Day of the Year.” Two musical numbers in the beloved classic were restored to their original form in the remastered version. Now included is the full-length rendition of the song “We Are Santa's Elves.” The second enhanced number is “We're a Couple of Misfits,” a duet between Rudolph and his newfound friend, Hermey the Elf.

Over the years, fading and degeneration of the print had caused it to take on a reddish hue that differs significantly from the bluer tones and starker contrasts of the original.  This color-corrected version from 1998 allows a new generation of television viewers to appreciate the special's original visual texture and rich palette of colors.  Santa's elves have their blue suits back after years of wearing faded green.

The scene restorations and color correction process for RUDOLPH THE RED-NOSED REINDEER were completed by Golden Books. The special was produced by “Animagic” pioneers Arthur Rankin, Jr. and Jules Bass and directed by Larry Roemer. Romeo Muller wrote the television adaptation from a story by Robert L. May.

Niko the young reindeer yearns to fly just like his dad, whom he believes is a member of Santa's Flying Forces. Following an attack by wolves on his herd's peaceful home, he heads off on a desperate, dangerous mission through icy blizzards and across wild terrain to find his father.  He discovers a devious plan to destroy and replace the famous flying squadron by the evil Black Wolf and his gang.

On his heroic journey to find his father and save Christmas, Niko is accompanied by his constant friend and surrogate father Julius, a clumsy squirrel who has nurtured and indulged the boy's dream.  Julius knows he has to persuade Niko to return home to the safety of the herd, but much to his annoyance they are then joined by a sassy young singing weasel called Wilma, who actually knows the way to

As the brave trio encounters obstacles on their hazardous journey, Niko faces the biggest challenge of all when he must choose between the life he has dreamed about and a life with his family.

A Home For The Holidays -- The 16th Annual “A Home for the Holidays” special features uplifting stories about children from foster care and the inspiring families that adopted them, each of which is enhanced with performances by some of today’s most popular artists.  Performances and Artists TBA.

Magnificent Mile Lights Festival 2015 – For 50 Years, the lighted trees along Chicago’s North Michigan Avenue has signaled the official Kick-off to the holiday season.  For the past 23 years, Chicago has celebrated the start of the season with a tree-lighting parade of floats, giant helium-filled balloons, marching bands, classic Disney characters and appearances by musical artists.

Santa Claus: The Movie –Starring Dudley Moore, John Lithgow, David Huddleston.  The story of a master toymaker who discovers a magical kingdom of elves in the North Pole and becomes Santa Claus. But when Santa's eager-to-please elf Patch leaves the North Pole for the big streets of New York City, he becomes mixed up with a dastardly toy tycoon's plans to take over Christmas.  And so begins Santa's greatest adventure of all - to rescue his faithful elf and to save Christmas for all the children of the world!