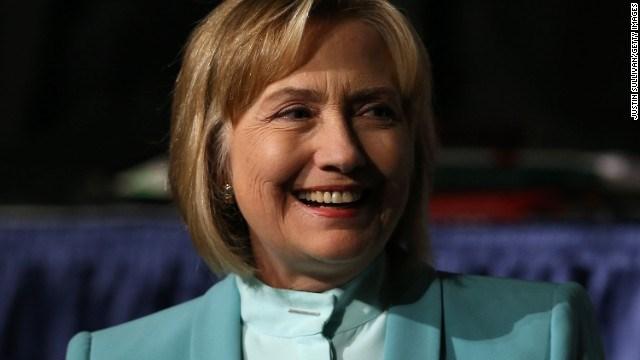 (CNN) -- Hillary Clinton put an end to months of speculation on Sunday by officially announcing her candidacy for president, giving the former secretary of state another shot at cracking the highest glass ceiling in American politics.

The initial word came in an email to supporters from John Podesta, a longtime Clinton ally, then a video launched on YouTube and a newly launched Facebook page.

\"I'm getting ready to do something too. I'm running for president,\" Clinton said in the video. \"Everyday Americans need a champion, and I want to be that champion -- so you can do more than just get by -- you can get ahead. And stay ahead. Because when families are strong, America is strong. So I'm hitting the road to earn your vote, because it's your time. And I hope you'll join me on this journey.\"

Clinton was at her home in New York for the launch of her campaign. She will be making some calls to top Democrats Sunday, as will her senior staff, according to a campaign official.

Following the video release, the Clinton campaign sent our a press release detailing her next steps.

\"She's committed to spending the next six to eight weeks in a 'ramp up' period where her team will start to build a nation-wide grassroots organization, and she will spend her time engaging directly with voters,\" according to the release. \"In May, once her supporters in all 50

states are organized for house parties or to watch over live streams, Hillary will hold her first rally and deliver the speech to kick off her campaign.\"

Clinton's second presidential run is another chapter in a life that has seen the former first lady go from a child raised in a conservative home outside Chicago to one of the most recognizable women in the world. Clinton became a household name in 1992 when her husband, Bill Clinton, won the presidency.

Since then, Hillary Clinton has become a force in her own right, serving in the Senate for eight years, unsuccessfully running for president in 2008 and leading the State Department from 2009 to 2013.

Over the coming months, Clinton's campaign will plot how to reintroduce the former first lady -- on her own terms -- to the American people. Democrats close to Clinton have started to call her the most unknown famous person in the world. Their argument is that people know of Clinton -- she has near 100% name recognition in most polls -- but they don't know her story.

Using small, controlled events with everyday people, the campaign will hone in on Clinton's personal story, using themes such as her Midwestern upbringing, her mother's perseverance in the face of neglectful parents and Clinton's own time raising a daughter to cast the presidential hopeful in a more favorable, softer light than she was seen during much of her 2008 presidential run.

Clinton's candidacy has been widely anticipated. Even since before Clinton left the State Department in early 2013, speculation that she would take another shot at the White House has followed her.

For her part, Clinton willingly teased those expectations for the better part of the last two years as she crisscrossed the country delivering paid speeches, selling her new memoir and stumping for Democrats during the 2014 midterm elections. Throughout all of it, Clinton was consistently peppered with questions about her presidential ambitions and plans for the future. She was reluctant to tease a bid in early 2014 -- telling an audience in New Orleans that she wasn't even thinking about a run -- but grew less coy this year when she began to embrace the expectations around her.

Clinton, the first to enter the Democratic presidential field, enters the race as the prohibitive favorite for the nomination, even though some of her poll numbers have slipped of late, likely because of a nagging email controversy.

Clinton's dominance in the polls -- along with the work of a number of outside pro-Clinton organizations -- has helped freeze the Democratic field. But a dozen or so Republicans may ultimately line up for the chance to take Clinton on.

Though she just announced her candidacy on Sunday, she is already surrounded by a sizable Democratic operation; Clinton has had around 30 people \"volunteering\" on her behalf weeks.

Podesta, her anticipated campaign chairman, and Robby Mook, her expected campaign manager, began assembling a campaign apparatus this year, and a number of political operatives moved to New York in March and April to work for the nascent campaign. All of the new hires, however, have been considered volunteers until this point, meaning they have not been paid for weeks of work.

The team includes a handful of top aides and advisers from her 2008 run, but has intentionally drawn from new sources, including Democratic committees in Washington and, most notably, Obama's presidential runs in 2008 and 2012.

Clinton's top aides have already dispatched senior Democratic operatives to critical early states -- namely Iowa, New Hampshire, South Carolina and Nevada. Those hires are an attempt by Mook and others to signal that Clinton isn't taking the nomination for granted this time around, a charge that many early voters and experts leveled against her 2008 campaign.

In a memo distributed at meeting of campaign staff on Saturday, Mook stressed the importance of staying humble, disciplined and united.

\"We are humble,\" reads the memo, which was obtained by CNN from a Democrat in the room. \"We take nothing for granted, we are never afraid to lose, we always outcompete and fight for every vote we can win. We know this campaign will be won on the ground, in states.\"

Iowa's most active Democrats, who watched Clinton finish in an abysmal third in 2008, couldn't agree more.

\"She kind of thought she was inevitable and her staff were going to tell us how to do things,\" said Monica McCarthy, the former Union County Democratic Party chair and a Biden supporter in 2008. \"Iowa, we are really spoiled, we are used to that pressing the flesh and talking to these people. We expect that.\"

The Clinton campaign will start that process right after the Clinton video is released, according a Democrat with knowledge of the planning, who said senior campaign aides will start to call top Democratic officials across the country once the video is posted to talk about the campaign, messaging and how they may get involved in the campaign.

Clinton's headquarters will be in Brooklyn, a culturally and economically diverse borough of New York City that the campaign will likely use as a backdrop for a message, it says, will focus on equality, inclusion and prosperity for all Americans.

The road to Clinton's second presidential run has been far from flawless.

Democrats close to Clinton say the former first lady had preferred waiting until summer to make her presidential ambitions official and had a number to top aides discouraging her from getting into the race at all. But once Clinton decided to run, the start of 2015 -- a period defined by multiple controversies around the former first family -- crystallized for Clinton and her team why a campaign apparatus was critically needed.

Her family's foundation, the Clinton Foundation, came under fire this year for not properly vetting foreign donations while Clinton was secretary of state. The controversy was a headache for Clinton aides and supporters who were caught somewhat flat-footed, and provided Republicans a tailor-made opportunity to charge the former first family with cronyism and selling access.

March found Clinton at the center of her own controversy over her exclusive use of private -- rather than official -- email during her time running the State Department. Republicans seized on the news and Clinton was forced to respond in a quickly organized press conference at the United Nations.

\"With respect to any sort of future issues, I trust the American people to make their decisions about political and public matters,\" Clinton said in response to a question about her presidential aspiration at the press conference. \"I look forward to having a discussion about that.\"

Republicans are near certain that Clinton will be the Democratic nominee. On a surrogate call preparing Republicans for her announcement, Sean Spicer, the Republican National Committee communications director, said that he felt Clinton losing the nomination was as likely as him \"getting struck by lightning riding a unicorn.\"

Republicans have been near solely focused on Clinton for more than a year, knocking the former secretary of state on different controversies and looking to cast her as an out-of-touch plutocrat unable to connect with the needs of everyday Americans.

Clinton's recent controversies over the foundation and her emails have already featured prominently in attacks against her. After news broke on Friday that Clinton was announcing, the Republican National Committee spent more than $100,000 on a web ad that hits Clinton for her recent controversies. The ad is targeted at independent voters in Ohio, Florida, Virginia, Colorado, North Carolina and Iowa.

Our attacks \"ultimately have to lead to questions that Hillary can't answer,\" said Newt Gingrich, the former House speaker and a longtime Clinton foil. \"I think if we keep her in a situation where she can never do a press conference and she can never take questions, she shrinks. ... I am pretty optimistic that she will shrink steadily throughout the next year.\"