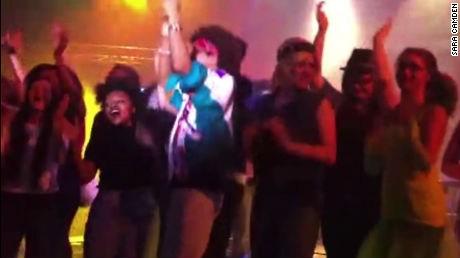 About two dozen students at an Indiana high school were hurt Thursday night when the stage they were performing on collapsed.

The students at Westfield High School were performing in a school concert. All of the injured were on stage and transported to several local area hospitals, according to Capt. Charles Hollowell of the Westfield Police Department.

Most of the injuries were minor. One student was initially listed in critical condition, but that person is going to be fine, said Hollowell.

Westfield, a city about 25 miles north of Indianapolis, had about 75 students in a production called \"American Pie,\" says Westfield-Washington school official Chris Baldwin. A video of the incident obtained by CNN shows a few students on a platform performing, who are then joined by many other students coming on stage dancing, which resulted in the collapse into what looked to be a pit. Immediately following the collapse, audience members are heard screaming and some are seen rushing towards the stage area.

What caused the collapse was unknown Thursday night.

An investigation is ongoing, and the high school will be open Friday.

Hollowell said he was \"just thankful all the kids will be OK.\"