THIS BLOG IS HAS BEEN UPDATED. CLICK HERE FOR THE LATEST WEATHER UPDATES.

A good chunk of snow has already fallen across southeast Wisconsin. The latest snow reports have showed anywhere from 4-7" of snow across the area. 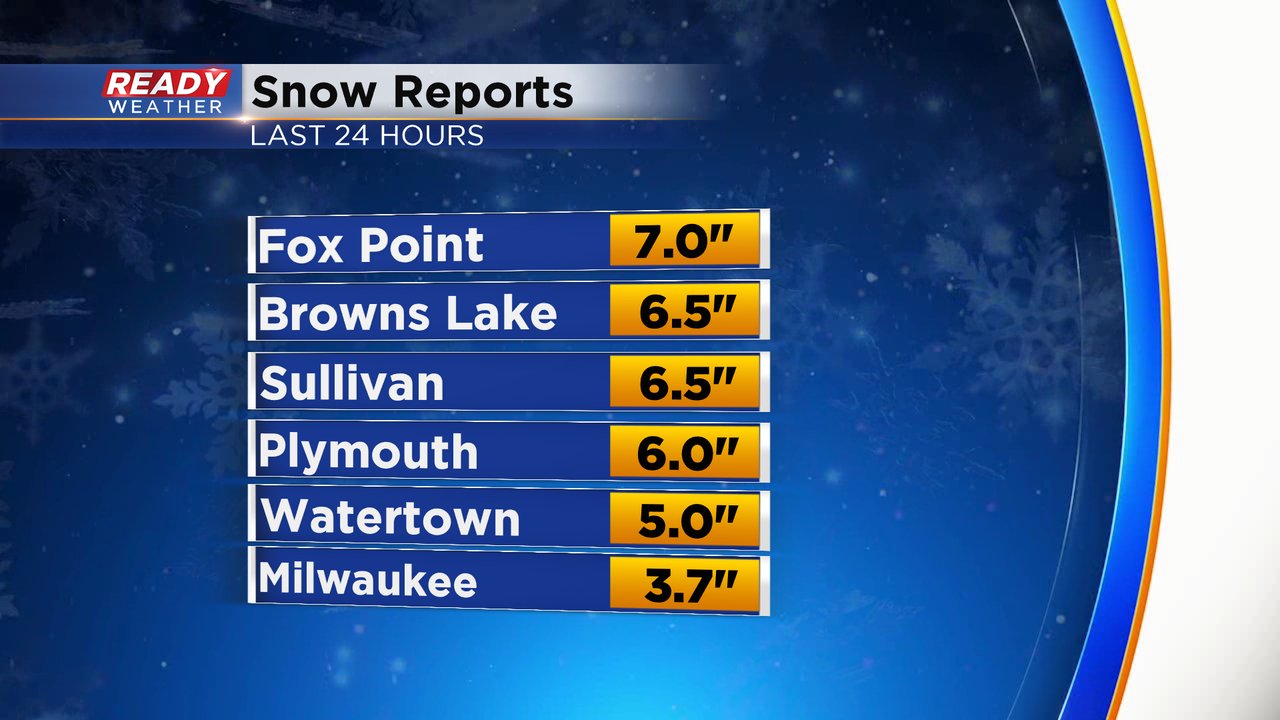 Snow has started to wrap up in some of our western and northern spots. Snow is mixing with sleet and freezing rain in areas around Waukesha, Milwaukee, Racine, Kenosha and Walworth Counties. 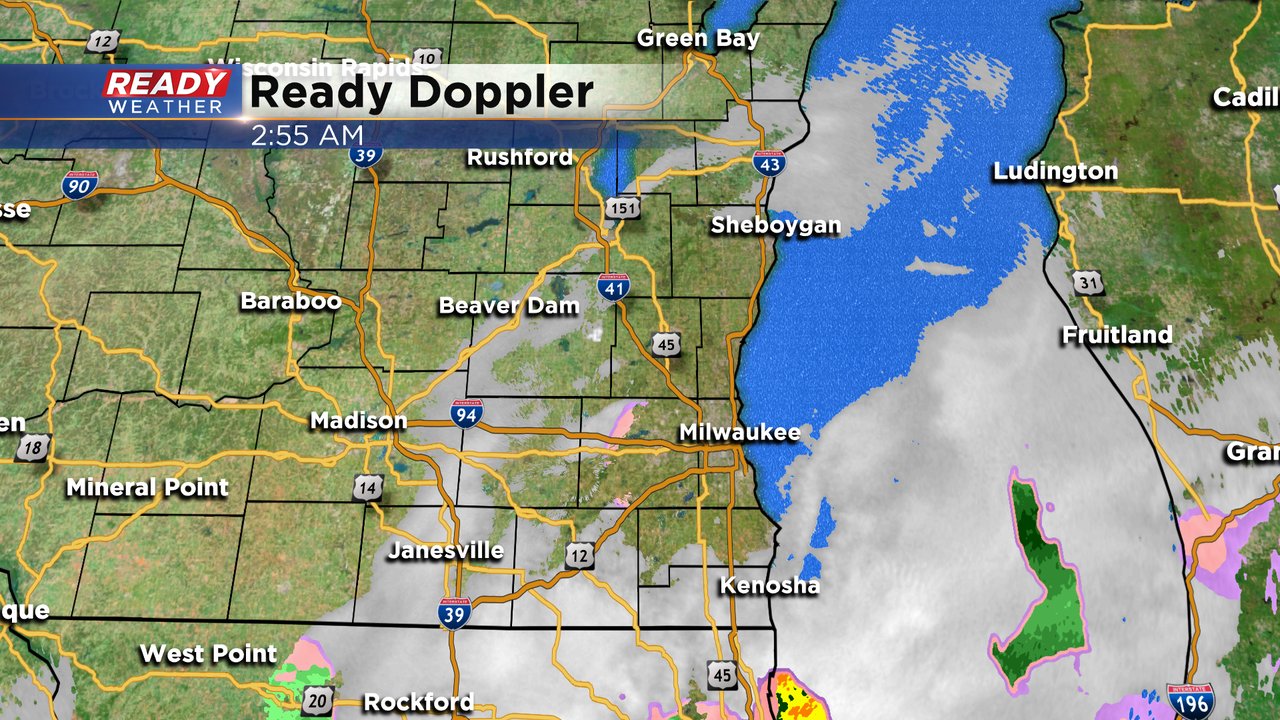 As the snow starts to lighten up and wrap up road conditions are improving but as of 4:30 a.m. road conditions are reported as snow covered all across southeast Wisconsin. It will take you at least twice as long to get into work. Leave early and take it slow! 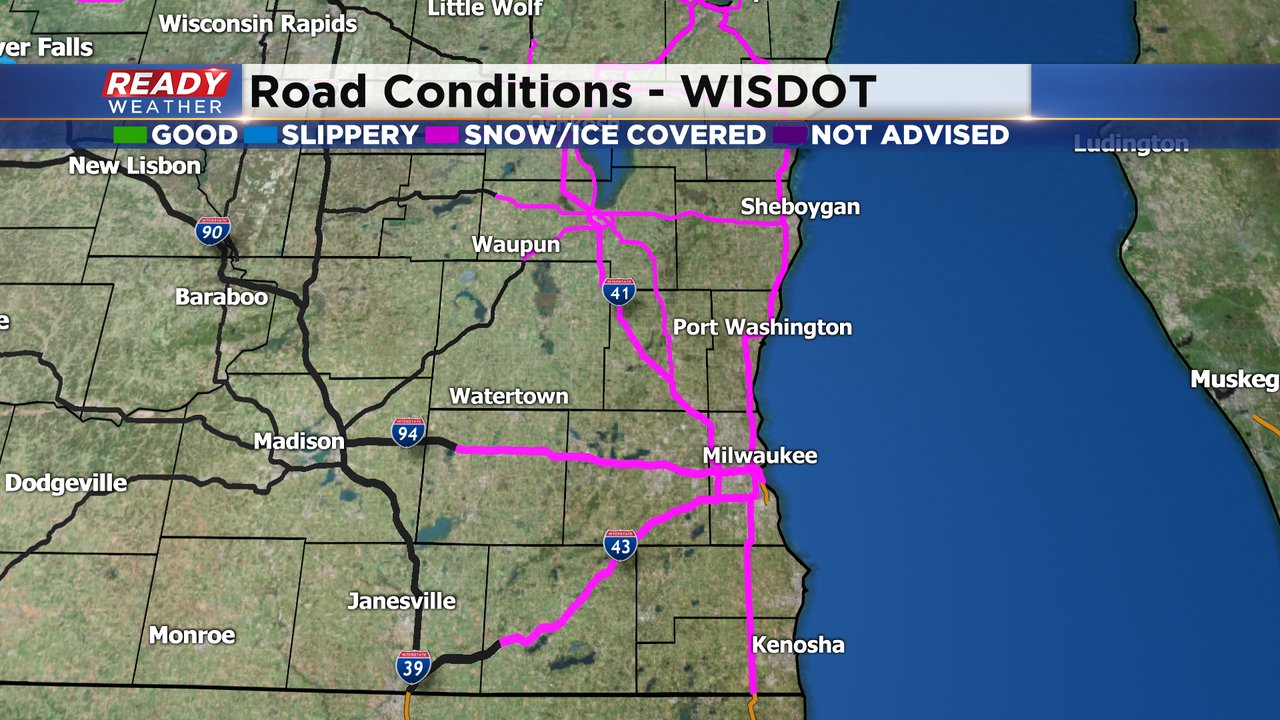 No doubt it's been a busy night in the weather office tracking our first widespread significant snowfall of the season. Here's a check of Ready Doppler: 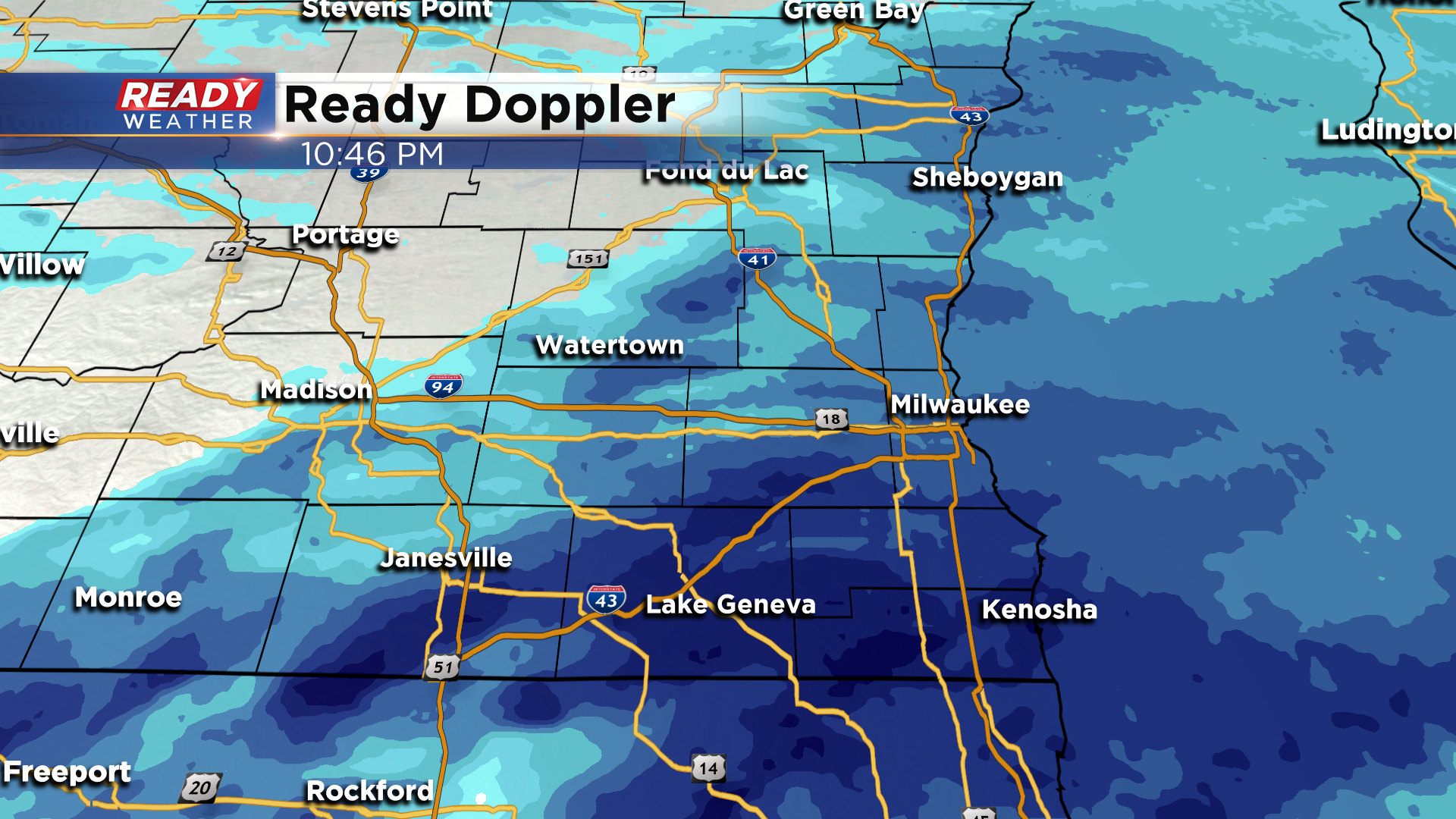 At this time moderate to heavy snow is falling in the darker shades and will likely continue at this clip for another two to three hours. Eventually we'll see the transition to more scattered snow showers as we head into the predawn hours. Closer to sunrise will then bring the additional threat of a wintry mix, mainly south of 94. By mid morning the snow should wrap up. The warning and advisory both run until 9am. As always, you can rely on the CBS58 Ready Weather App to keep you up to date as this storm continues to push across the area. One feature I like is the future radar product to help you plan any travel in the next several hours. It's free to download and available on Apple and Android devices!

Snow totals continue to filter into the office. Here's the latest spread as of 10pm: 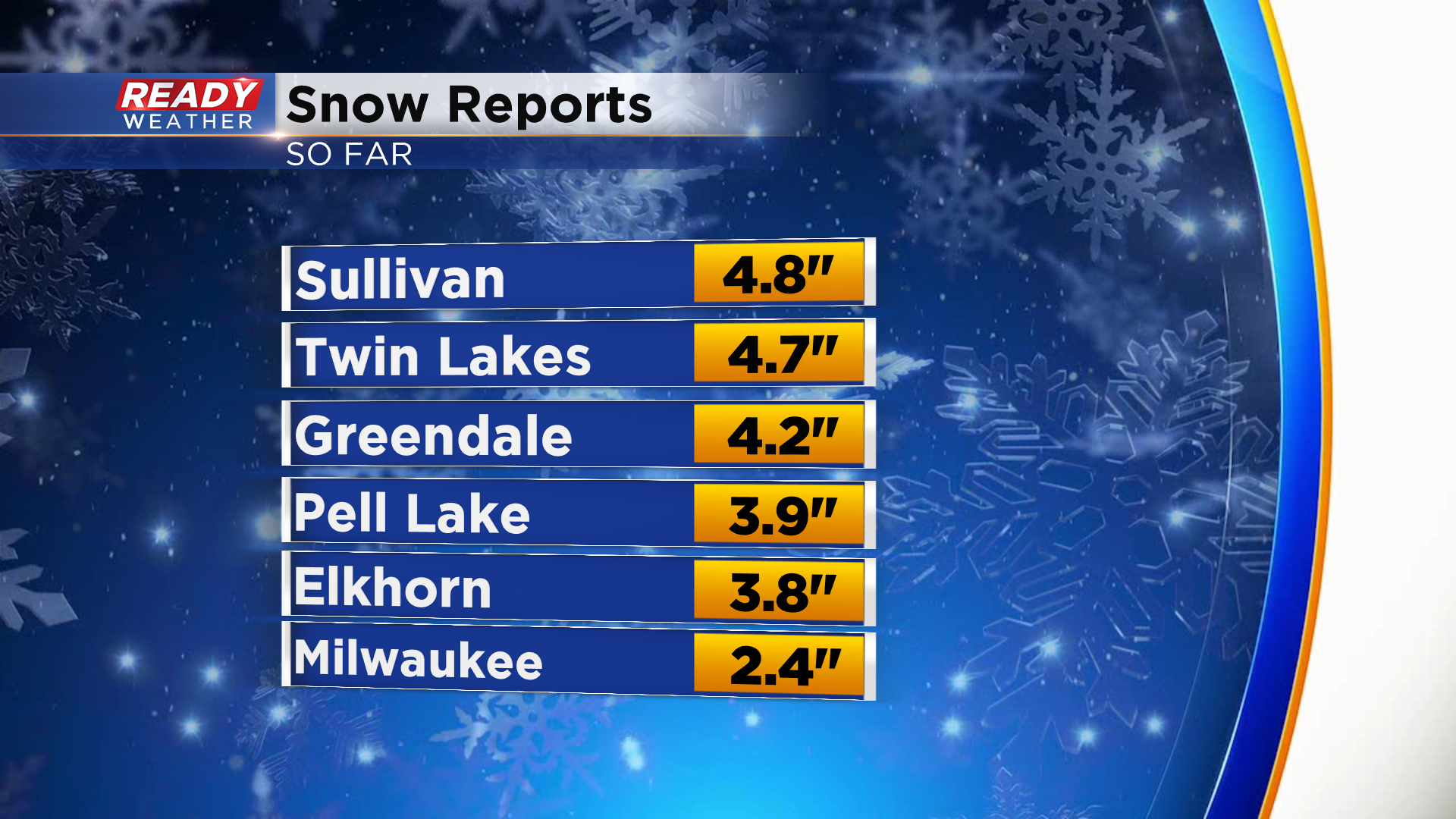 As the core of this storm is now nearby we're also feeling stronger winds gusting from the southeast to near 40mph which is creating very poor visibility. The DOT has responded to a handful of accidents out on the roads as they report snow covered roads area wide.

Snow is starting to pile up quickly! As a result, the National Weather Service has just expanded the Winter Storm Warning to include Waukesha, Racine and Kenosha counties. 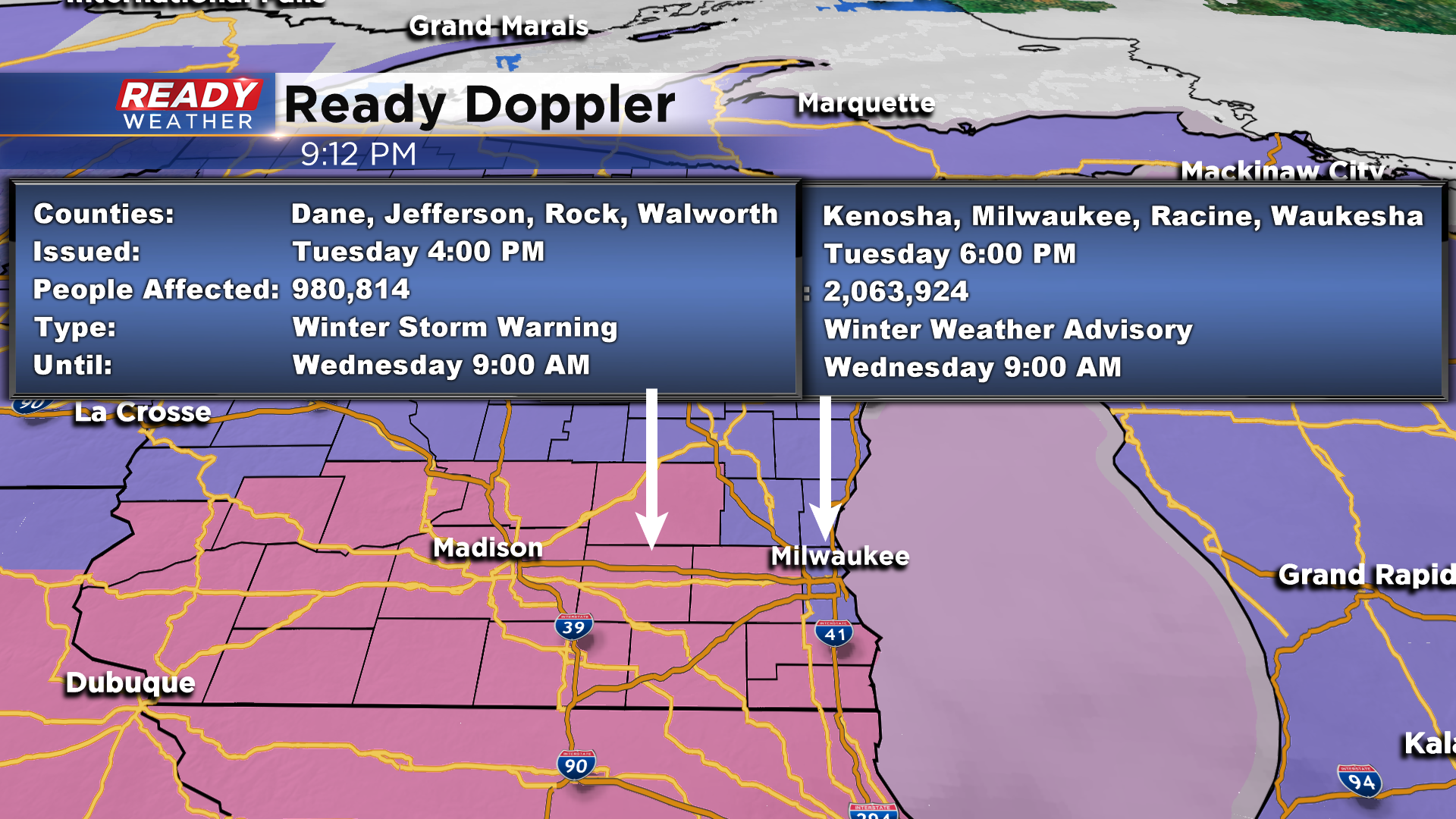 In addition to these counties now looking to end on the high end of forecast totals, the threat of a wintry mix still exists during the predawn hours of Wednesday.

With the snow and wind firmly in place, road travel is poor areawide. Here's the latest from the Wisconsin DOT: 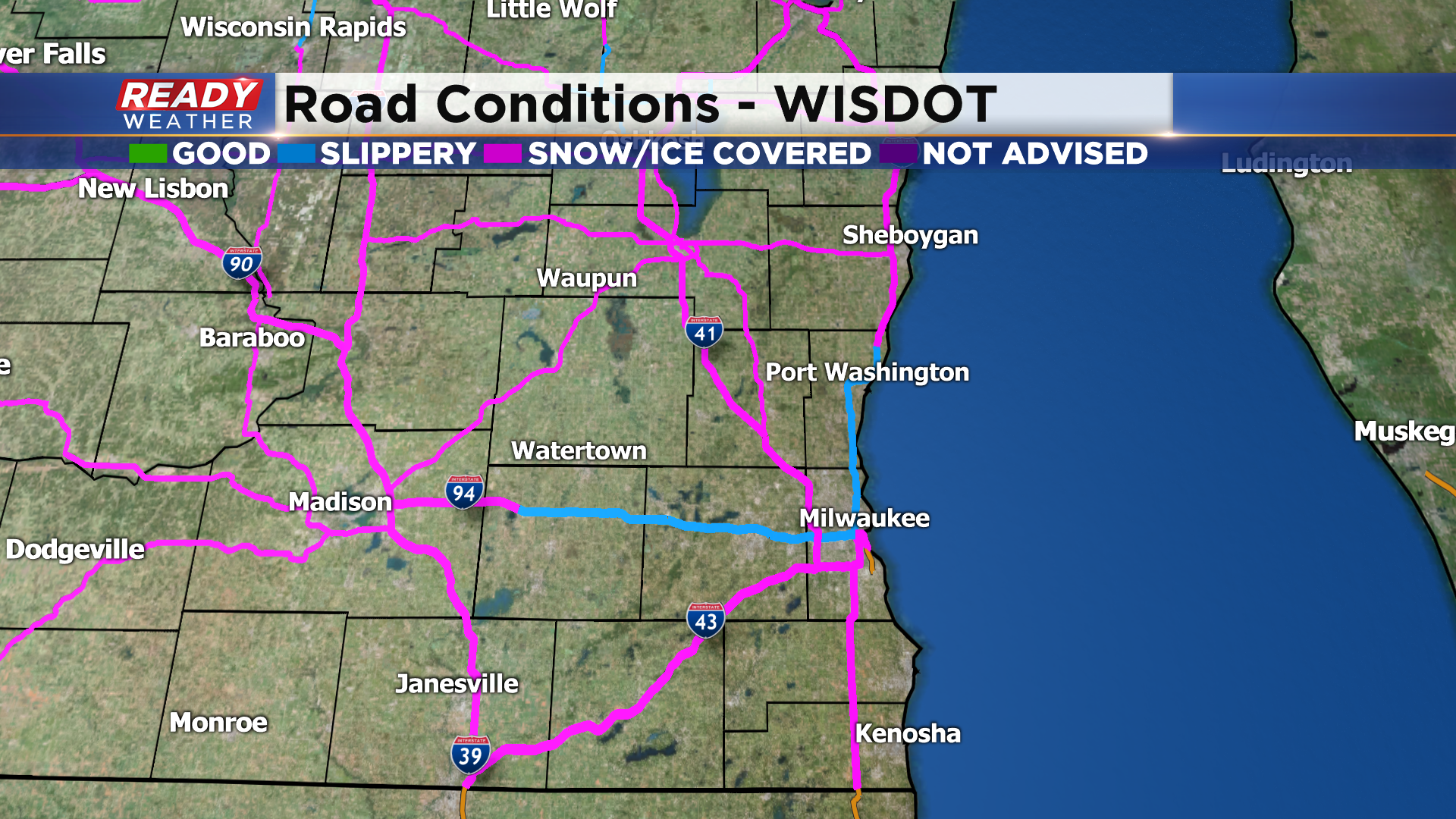 We're starting to see a coating of snow on the ground in Milwaukee. 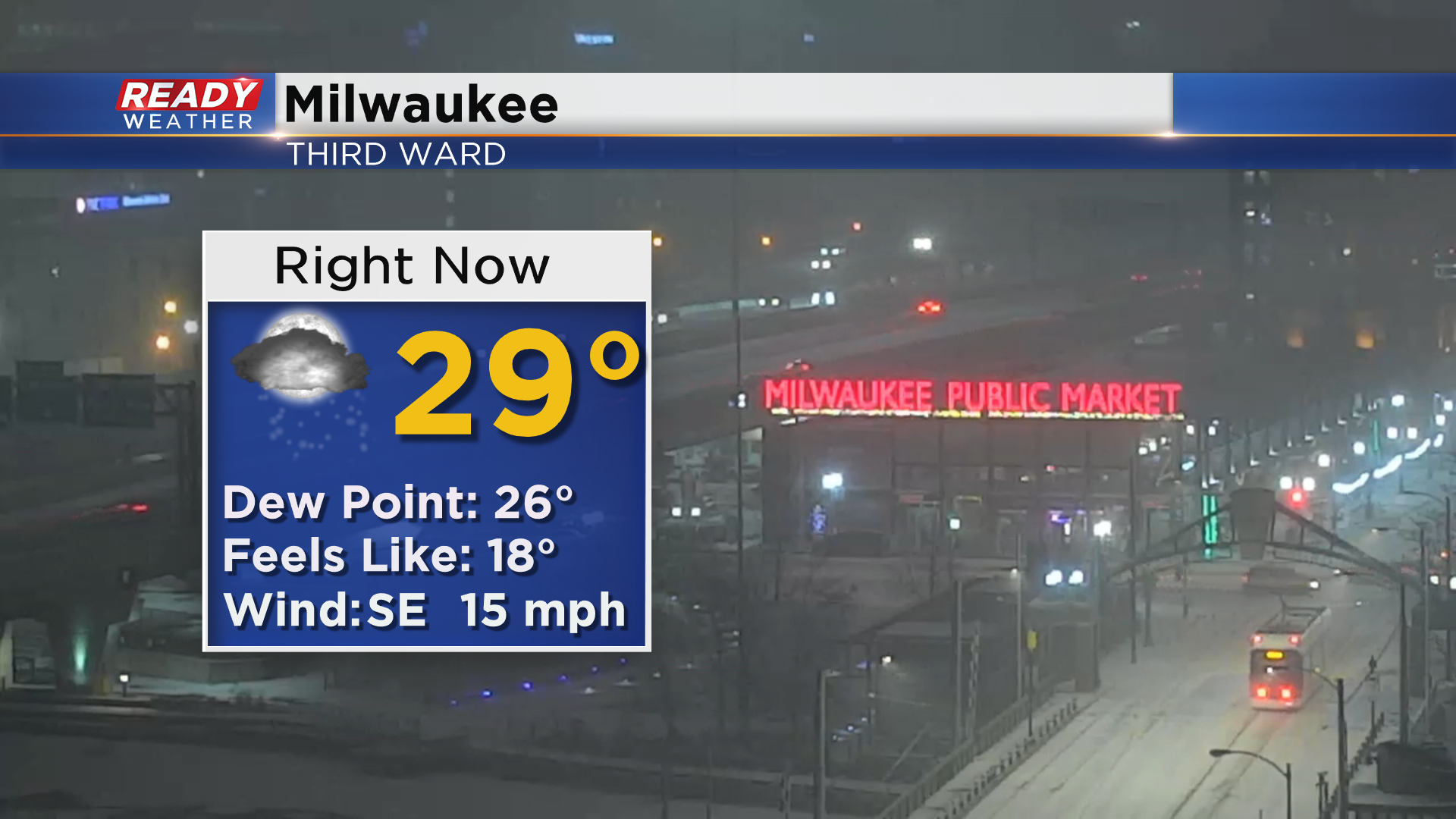 Looks like the Streetcar is moving along just fine, but you can see roads are white in Milwaukee's Third Ward District. As of 6pm just a trace of snow is reported at Milwaukee Mitchell Airport, but a half inch of snow has accumulated in Madison and further southwest snow rates are increasing. We've even had reports of thunder snow in Iowa. A sign of the strength of this storm!

Visibility is starting to go downhill as well. Take a look: 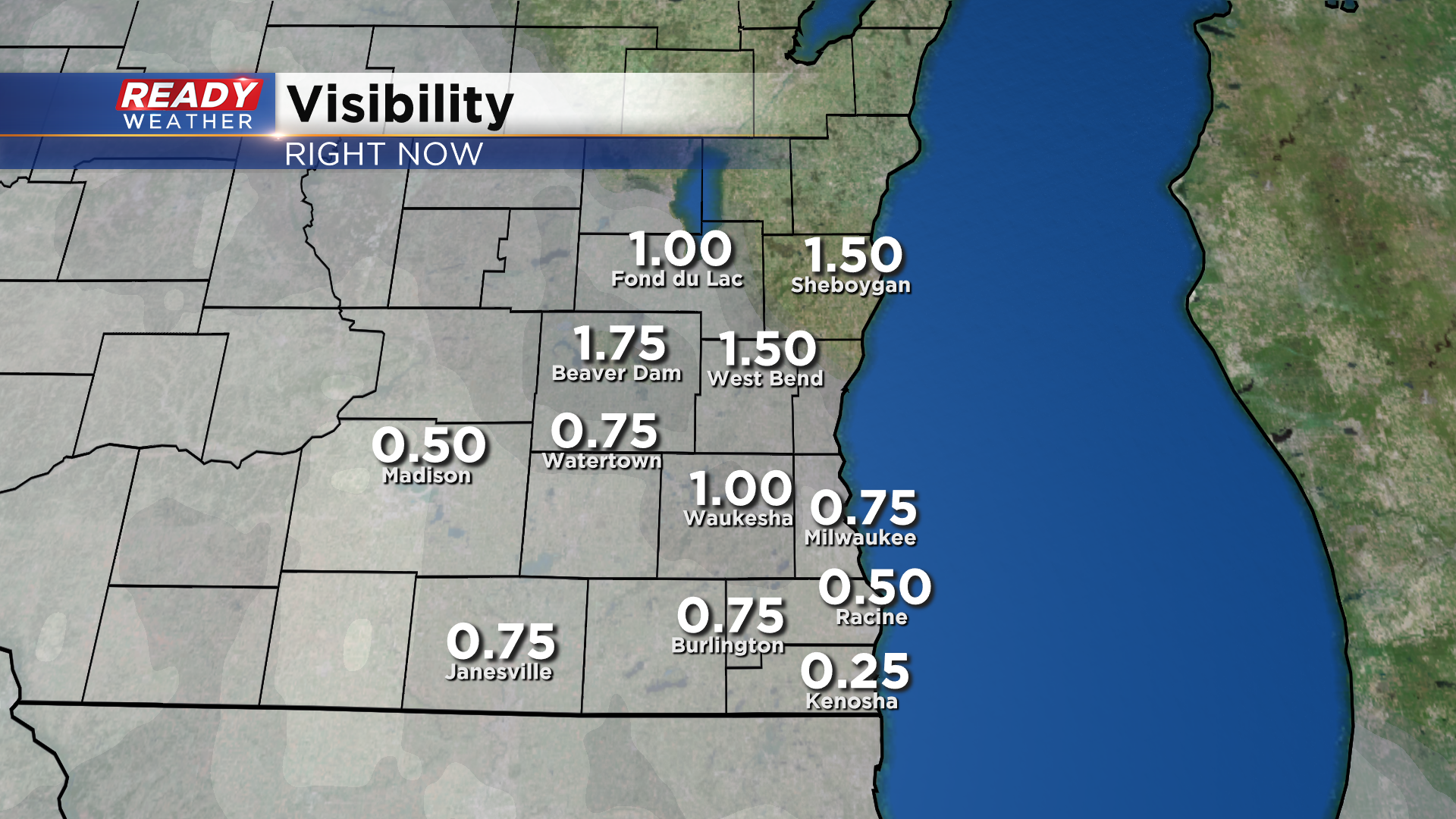 We are still monitoring any sleet and freezing rain that may wrap into this storm later tonight as temps slowly rise into the night. 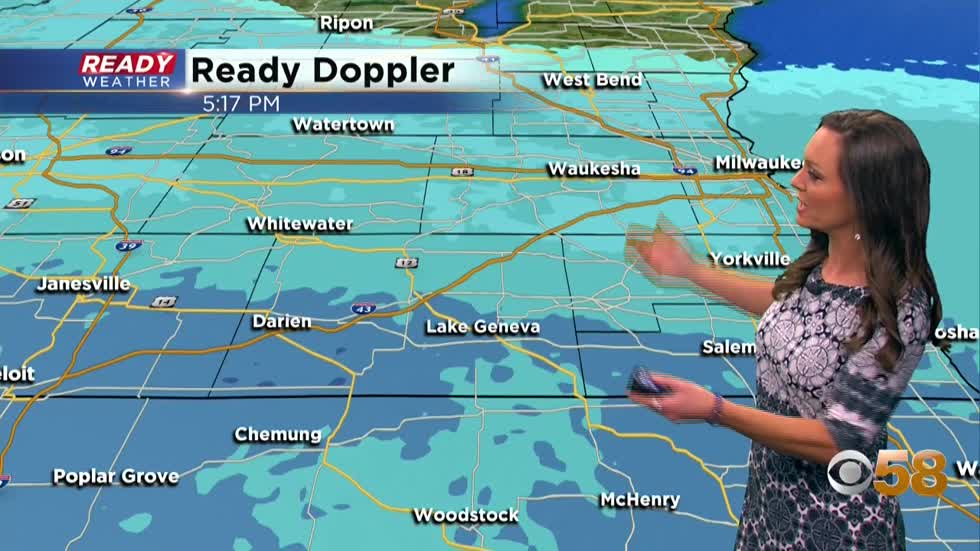 Snow is now spreading into the viewing area on the radar. However, there is still dry air to overcome and much of the area is not seeing snow at the surface just yet, but we do expect conditions to rapidly change in the next hour. Expect road conditions to deteriorate quickly once snow reaches the ground along with lowered visibility as southeast winds picks up at 10-20mph. Not to far to the west there have been reports of thundersnow which indicates the strength of this storm and has provided snowfall rates at an inch per hour. Additionally, with the southeast wind temps will likely rise a few degrees tonight. This will lead to a wintry mix along lakeshore spots from Milwaukee and points south. Please avoid travel tonight if possible or give yourself plenty of extra time to reach your destination.

Again, want to stress the thinking about snow amounts really hasn't changed.  3-6"+ around the metro with higher amounts south and west.  The Winter Storm Warning kicks in at 4pm and goes until 9 am Wednesday.  Everyone else has the Winter Weather Advisory in place from 6 pm Tuesday until 9 am Wednesday. 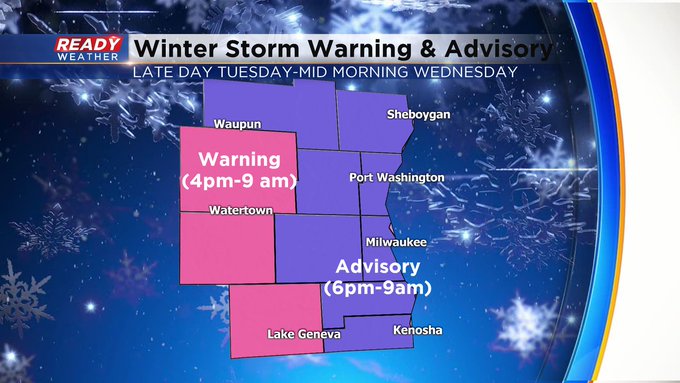 Please be careful shoveling.  This looks to be a heavy snow.  Also, please share some photos with us at [email protected] or via the mobile weather app.

One update to pass along concerning the end time of the winter weather alerts.  Both the Winter Storm Warning & Winter Weather Advisories will end at 9 am Wednesday, not noon on Wednesday.  The start times remain the same.  4pm today for the Warning and 6 pm for the Advisory. Meantime, it'll be interesting to see how much snow piles up in the next day.  We need to start catching up.  Currently, we're almost a foot below normal.  If we get more than 6 inches, we'll be half the way there!  Stay tuned. 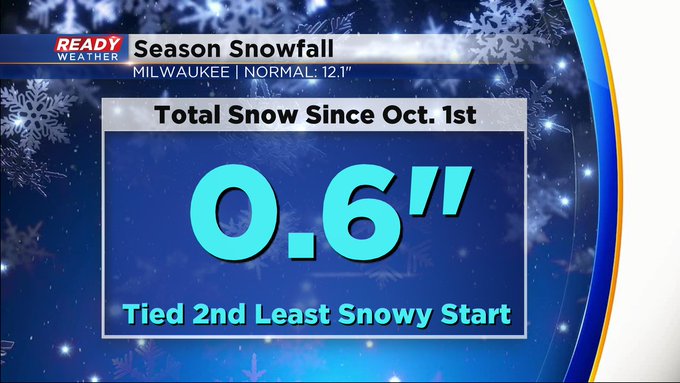 Now we sit and wait for the impending snow storm.  It still looks snow arrives from the west around dinnertime across the metro.  The snow intensity will only increase as the evening proceeds.  Visibility will get worse as winds increase from the south.  We could easily have snow falling at the rate of an inch an hour.  After midnight, it looks like snow will mix with freezing rain and sleet.  The big question is how far north the warm air gets.  As it stands now, the warmer air will be stay south of Milwaukee.  Total accumulation of 3 to 6 inches looks good across the metro and more the farther northwest and southwest you go.  It's interesting to look at the range of what we're expecting when you compare the weather computer models we use. 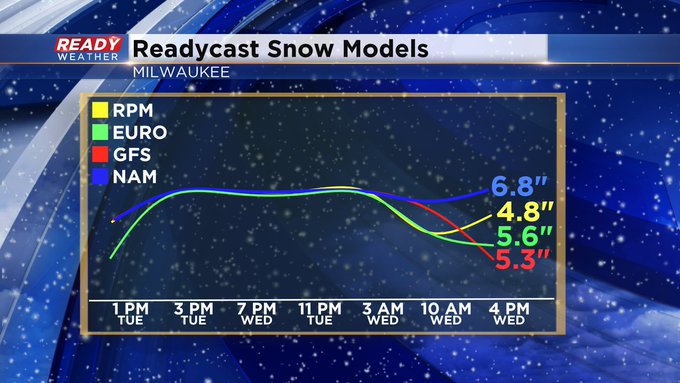 Bottom line, get ready for the first real snow of the season.  Keep in mind it'll be a heavy moisture content so shovel carefully.  Maybe even do the task in stages.  Also, keep it tuned to CBS 58 throughout the day today and Wednesday for the latest developments.  Also make sure your CBS 58 Ready Weather app is downloaded as well so you can keep track of the snow and wintry precip on the radar when it arrives.

Our quick hit of sunshine Tuesday morning is gone and now it's all about the clouds the rest of the day. Snow is still expected to arrive around dinnertime Tuesday evening with heavy snow expected all night. Snow could come down as fast as one or two inches per hour. Shoveling tonight before you go to bed might not be a bad idea due to the heavy, wet nature of the snow. After heavily snowing at night the snow will begin to taper off Wednesday morning. Driving is not recommended between 8 pm and 8 am. 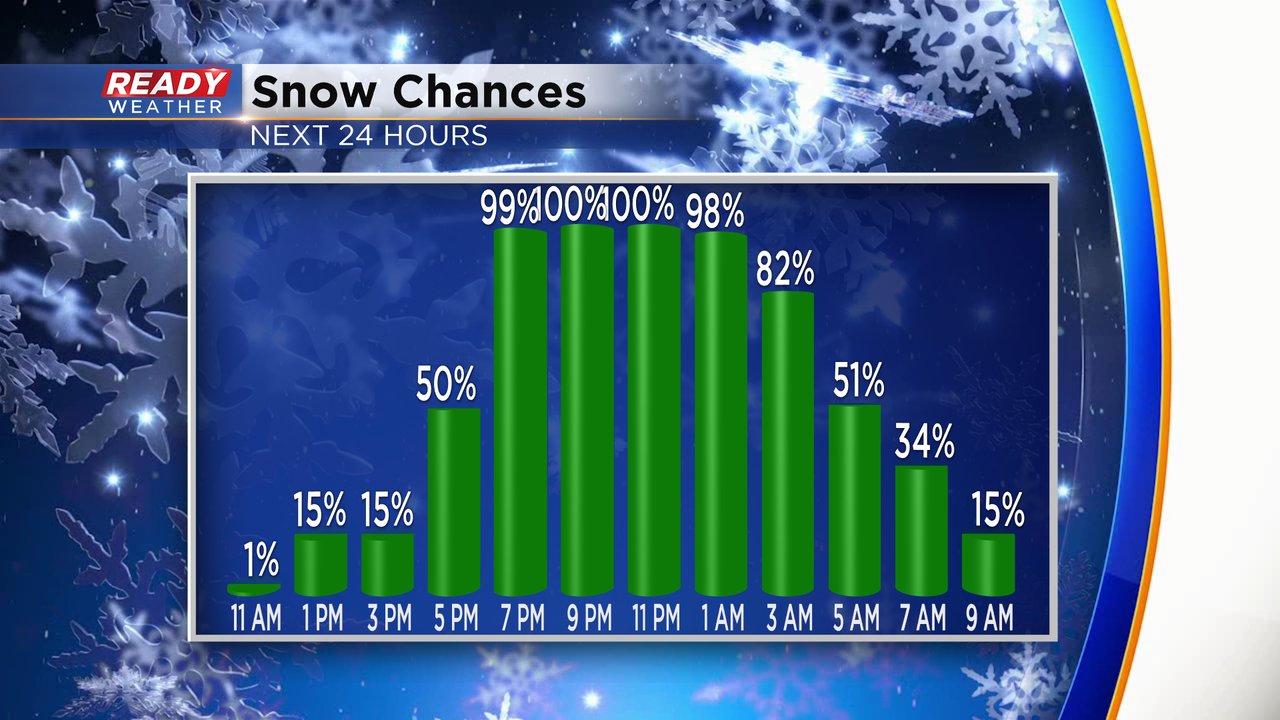 Some of you, mainly northwest areas like Fond du Lac, Beaver Dam, West Bend and Fort Atkinson, have had some good snows this year but we haven't had one that's impacted the entire viewing area - yet. That changes tonight with a round of moderate to heavy snow rolling in. Timing of the storm is pretty much on track. If there's any changes with timing it's that the snow's start time is an hour or 90 minutes earlier. That means by 7 pm Tuesday evening all of southeast Wisconsin will see the snow so it will be best to get out of work a little earlier if you can. 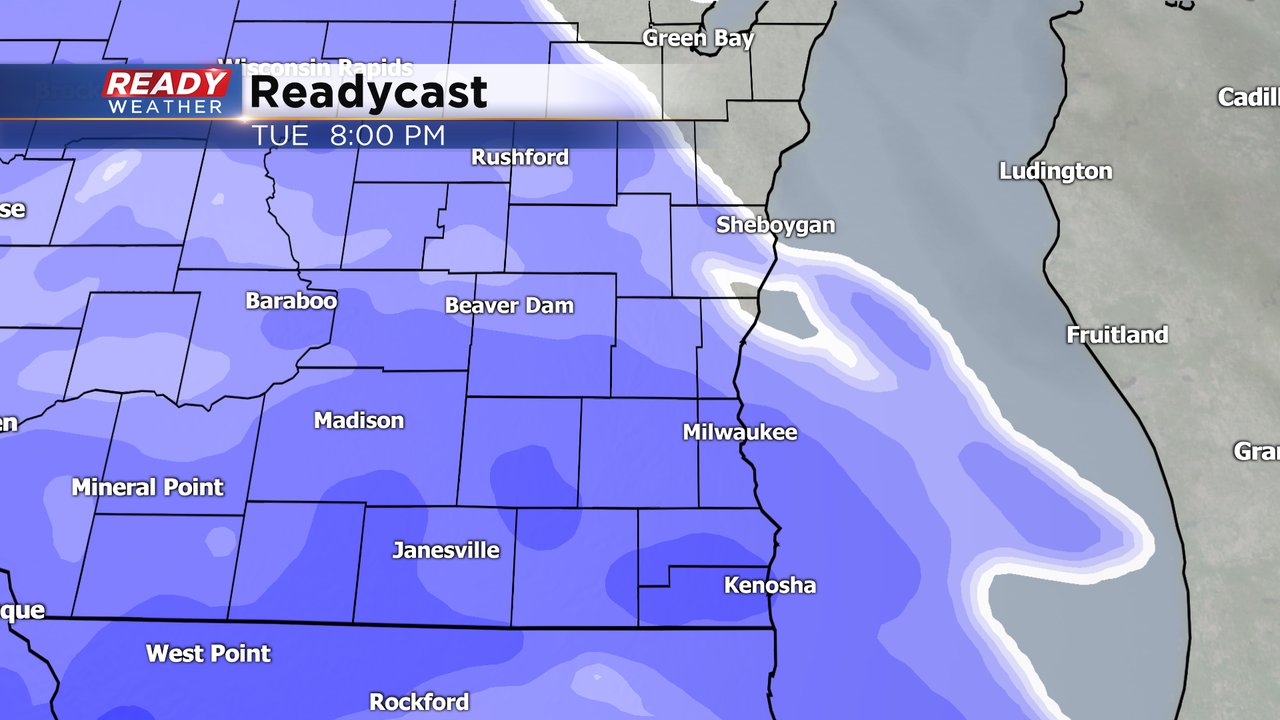 Once it starts snowing it will come down pretty fast and pile up quickly rapidly decreasing road conditions Tuesday night into Wednesday morning. A winter storm warning has been issued for Dodge, Jefferson and Walworth Counties where they will likely see the most snow. Everyone else is under a winter weather advisory that starts around dinner time Tuesday evening and lasts through noon on Wednesday. 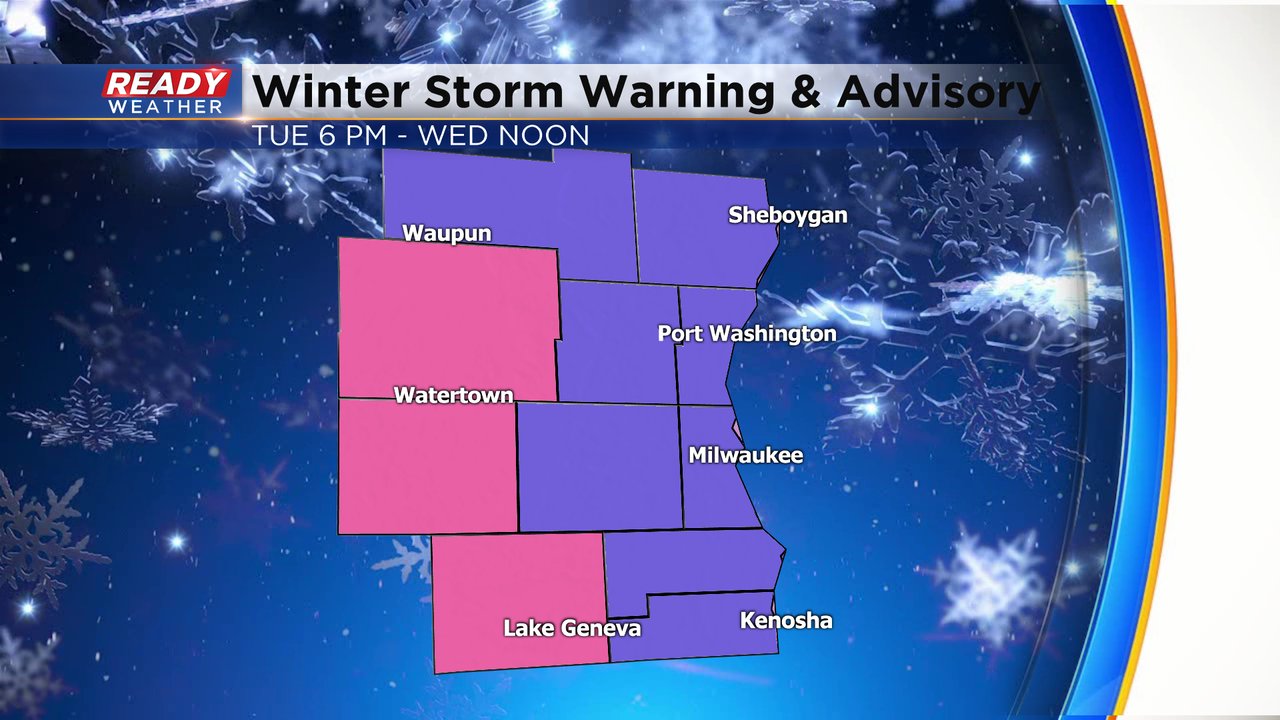 Snow totals have overall increased a bit from Monday's forecast and the area of heaviest snow has moved east a little into our western spots. With 12 hours to go until the snow starts falling we are expecting our lakeside, north and southeast spots to pick up 3-6" of snow and our western counties and some central areas (like Beaver Dam, West Bend, Johnson Creek, Oconomowoc, Lake Geneva) to get as much as 9". 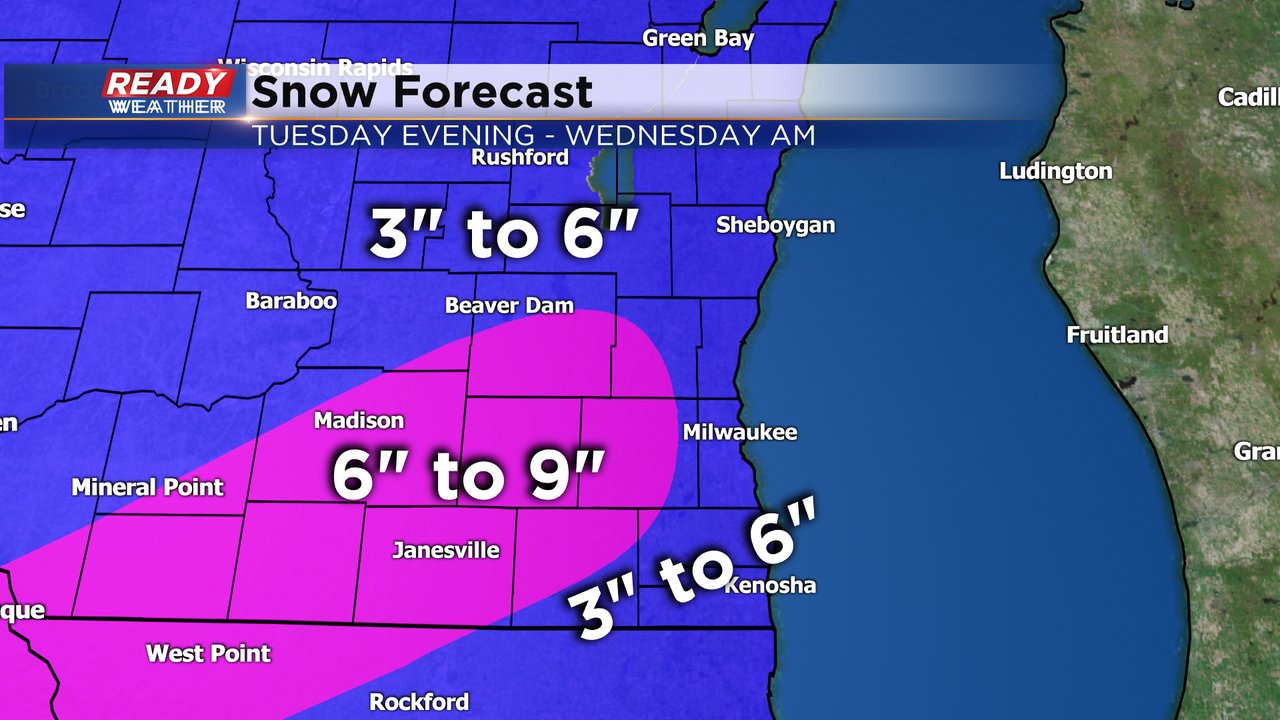 The snow and the impact on the roads will be the biggest threat. After a fairly light wind most of Tuesday the gusts will pick up to 30 mph Tuesday night and most of Wednesday so blowing snow will be an issue further decreasing visibility and making road conditions worse. 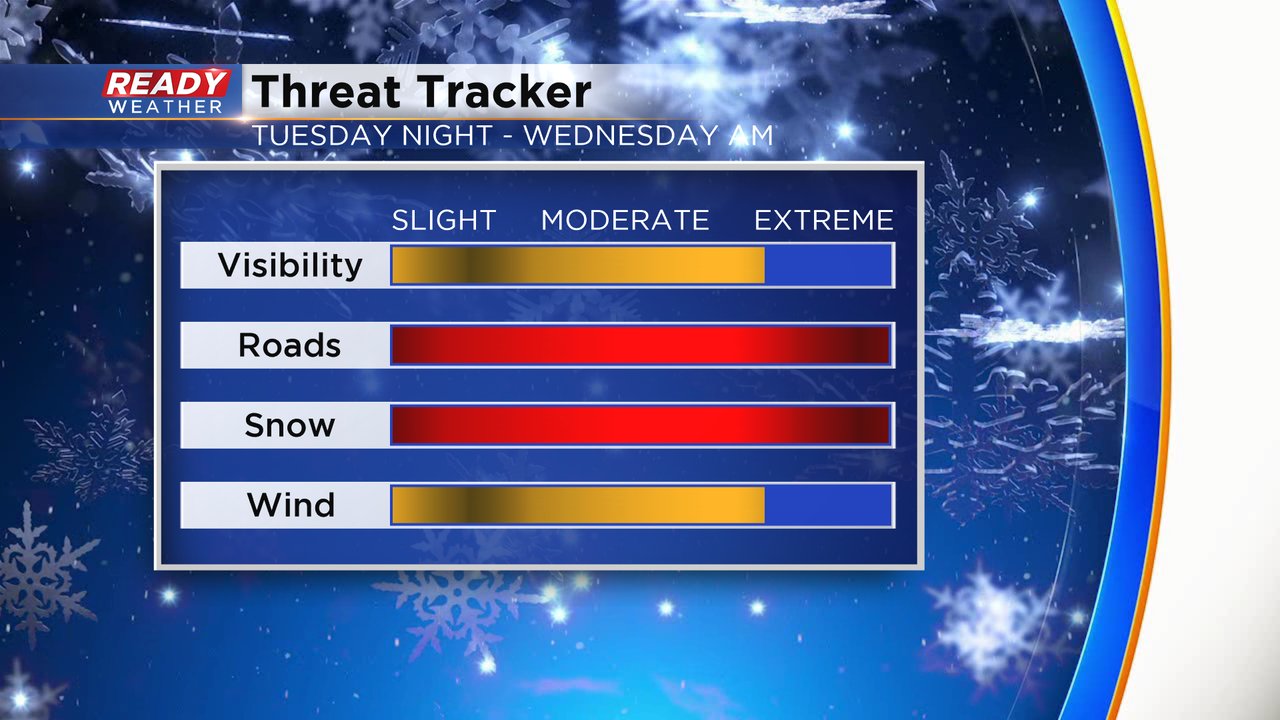 Here's a look at what you can expect on the roads if you have to head into work Wednesday morning. If you can delay the start of your work day and not leave your house until 9 or 10 am that would be best. Most major roads are expected to be snow covered Tuesday night but could start to improve a little bit towards morning as the snowfall rate starts to go down. Any east/west roads like I-43 from Milwaukee to Beloit or I-94 between Milwaukee and Madison could see some decent blowing and drifting snow as well. If you're heading to I-94 towards Chicago you could encounter a few icy patches as some mixed precip including freezing drizzle is possible Wednesday morning. 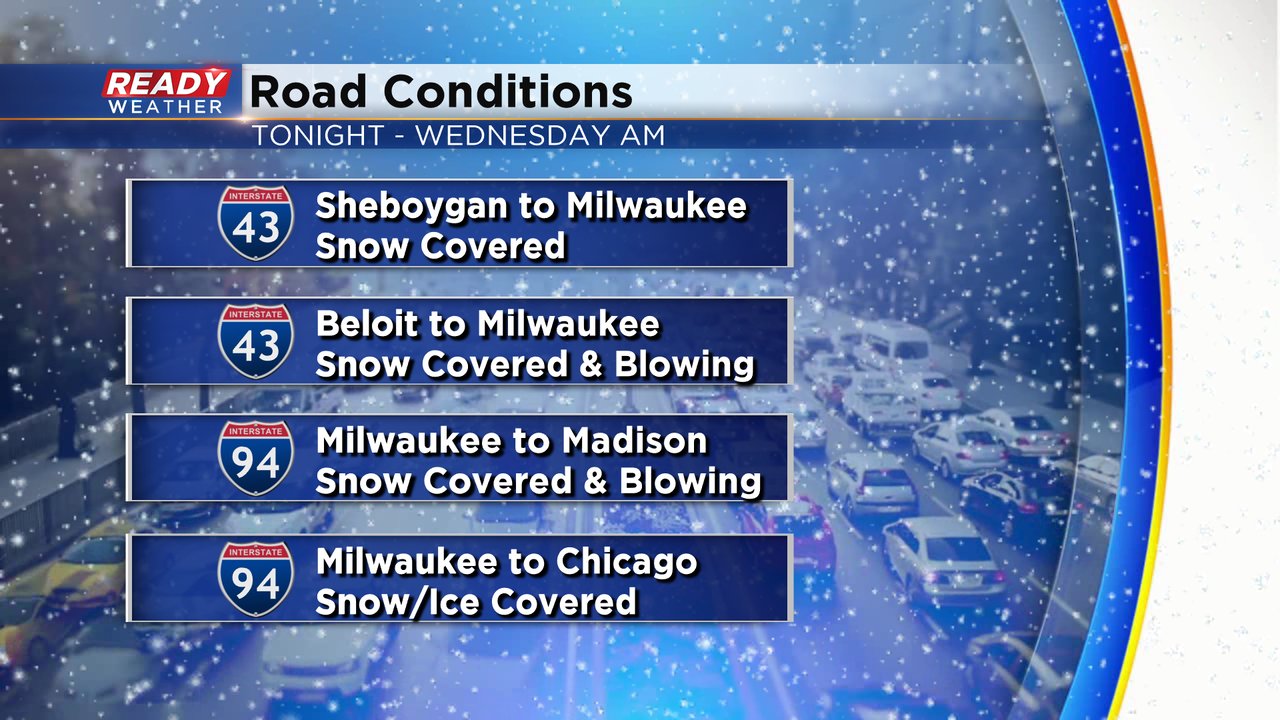 Download the CBS 58 Ready Weather app to keep up to date with the forecast changes and track the snow as it falls.