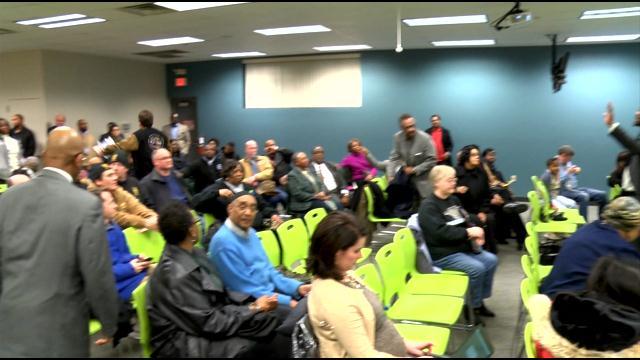 A heated exchange Tuesday evening between supporters and opponents at a public meeting on Milwaukee's Streetcar Project.  Ald. Joe Davis, an opponent to the project, was upset with when Ald. Russell Stamper tried who hosted the public meeting in his district.

\"If there's a message I can deliver tonight it's about economic growth,\" said Mayor Tom Barrett, \"it's about jobs, it's about betting on the future of Milwaukee.\"

\"This is a fiscal matter, it's about where the city of Milwaukee puts it's resources,\" said Ald. Davis.

The $124 Million project will be partially funded with federal money, and that has been a big source of discussion, but $59 Million will come from local Tax Incremental Funds (TIF).

\"This issue is really about the creation and extension of the TID in order for us to fund the streetcar project,\" said Ald. Davis.

TID stands for a \"Tax Incremental District,\" most local funds will come from a new TID, with $31 Million allocated to fund the project.  Opponents emphasize the money could go toward public safety.

\"While our officers will be furloughed again this year, 3 days each, that equates to 48-thousand man hours, that won't be on the street,\" said Mike Crivello, President of the Milwaukee Police Association.

Crivello and Dave Seager, President of Milwaukee's Local 215 both signed a petition to put the streetcar project on the ballot.

\"That's all we're asking for, to give the citizens of Milwaukee the opportunity to voice their opinion, pertaining to the streetcar,\" said Seager.

Supporters of the project argue this is a once in a lifetime opportunity, they say opponents, who will likely push back the vote are delaying an investment on the city's future.

\"We've got to get people back in the workforce and that's what we're trying to do,\" said Mayor Barrett.