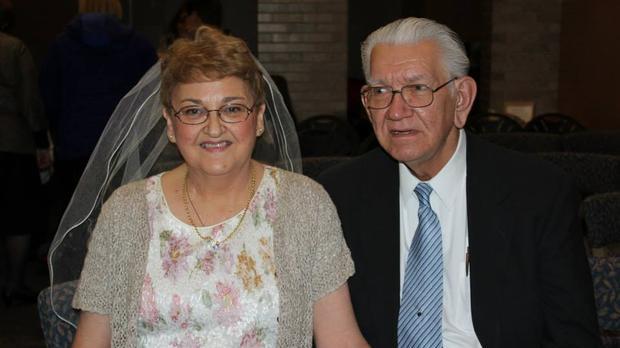 (CBS NEWS)--When Danny Pszczolkowski and his sweetheart Esther FitzRandolph walked down the aisle last weekend, they did so in the usual way, but in a most unusual place -- a hospital chapel.

\"It just seemed like the obvious place to be married when our love started here,\" said FitzRandolph.

As we first reported a couple months ago, Esther -- who was divorced -- and Danny -- a life-long bachelor --met at the University of Rochester's Strong Memorial Hospital in Rochester, New York. They were both there for follow-up appointments after their heart transplant surgeries. They were both having complications,and they were both depressed.

\"I didn't want to do anything,\" FitzRandolph told us. \"I would just sit around.\"

\"I kind of refused the exercises and all that at times,\" he told us.

Cardiologist Dr. Leway Chen said he and his staff didn't know about the romance.

\"We talked and said, 'Yea, she's doing better now, I wonder why. And yes, he's been more active and involved in his care, I wonder why,'\" said Chen.

\"When your mind is in a better place, and your heart, then you're going to heal better,\" said FitzRandolph.

For the last few months they've been living together on Carefree Lane. That's actually the name of the street -- where the lifelong bachelor now hangs his new, flowered coffee mugs.

\"This is even worst,\" FitzRandolph said, holding up more flowery ceramics.

Living with a woman will clearly take some getting used to. But Danny says he wouldn't trade this for the world. And he won't have to -- thanks to two new hearts that are now off and racing.
Share this article: