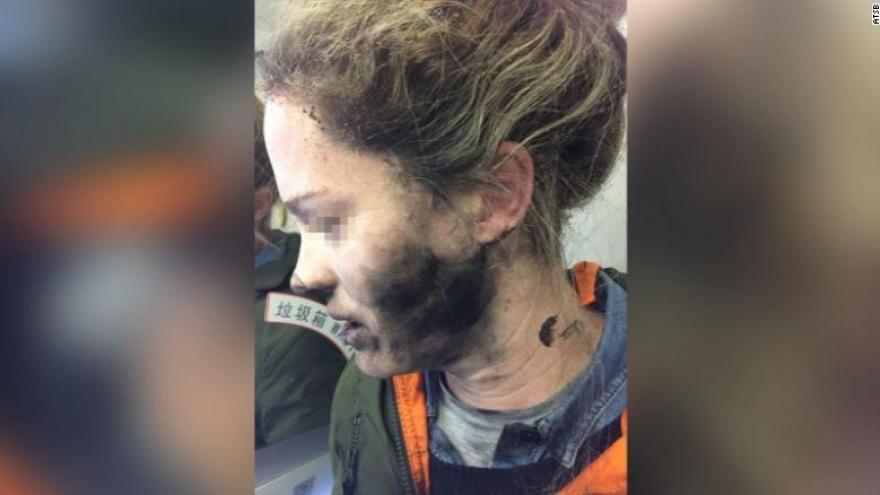 (CNN) Australian authorities will investigate why a pair of battery-powered headphones caught fire two hours into a flight between Beijing and Melbourne, blackening and blistering a female passenger's face and hands.

The women was sleeping and listening to music about two hours into the trip when she heard an explosion.

"As I went to turn around I felt burning on my face," she told the Australian Transport Safety Bureau (ATSB), which issued a statement Wednesday as a warning to other passengers.

"I just grabbed my face which caused the headphones to go around my neck," she said.

The woman, who was not identified, said she tore off the headphones and threw them to the floor, where she saw they were shooting off sparks and small flames.

"As I went to stamp my foot on them the flight attendants were already there with a bucket of water to pour on them. They put them into the bucket at the rear of the plane," she said.

They couldn't remove all of the headphones however -- both the battery and cover had melted into the aircraft floor.

"People were coughing and choking the entire way home," the passenger told the ATSB, adding the cabin reeked of melted plastic and burned hair.

"If it seems the device was damaged, then that will explain it ... but you know if it was a genuine battery and hadn't been abused then we will go to the manufacturer and see what's going on," he said.

Batteries known to cause plane fires

However, a spokesman wouldn't reveal what type of batteries or headphones were involved. He said the incident had occurred on February 19.

Only a day before the incident, an Airbus A320 that took off from China reportedly had to make an emergency landing in Nagoya, Japan, after a portable power pack started a fire inside an overhead locker.

Gibson said lithium batteries were often the cause of fires on board planes. He advised travelers to carry any spare batteries in a separate plastic bag within carry-on luggage.

"You must carry it in the cabin because downstairs, if it shorts out, it will smolder away ... by the time it's detected by the fire alarms it's a big problem. Upstairs, as soon as it starts smoking, the cabin crew can react quickly," he said.

Last year, US authorities banned Samsung Galaxy Note 7 from all US flights after its lithium battery was found to spontaneously ignite. The ban extended to shipping the phones as air cargo.

Samsung blamed faulty lithium-ion batteries, which it was said were overheating and causing the device to catch fire. Attempts to fix the problem failed and it later permanently halted production.

Australia's Civil Aviation Safety Authority has seen a sharp rise in incidents around electronic devices in recent years, from only three in 2011 to 106 in 2015, according to Flight Safety Australia.