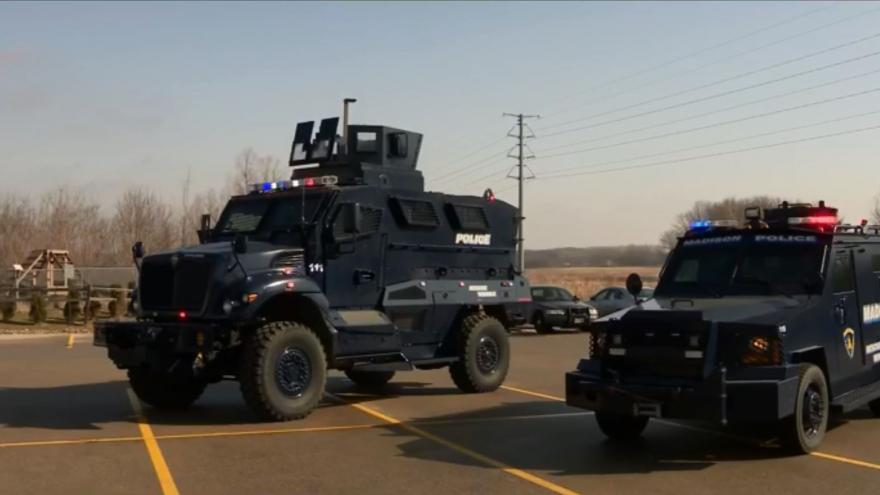 MADISON, Wis. (WISC) -- The Madison Police Department will no longer use a controversial military armored vehicle in responding to high-risk situations.

The mine-resistant armored vehicle (MRAP) MPD received for free from the U.S. military in 2014 was taken by the West Allis Police Department Wednesday.

It is being replaced by a Lenco Bearcat purchased used from the Dane County Sheriff's Department.

The department had been criticized in the past for using the military hand-me-down, despite its use in high-risk situations like a suspect firing an assault rifle from his home in 2014.

Police say the Bearcat is a smaller, more agile armored alternative, but admit that criticism is one of the reasons why they're opting out of the MRAP.

"Hopefully goes without saying [that] just because we are responding differently doesn't mean we stop being community policing officers which is sometimes hard to explain when you're driving a vehicle that looks like that and is as imposing as that," said South District Capt. John Patterson.

While Madison police never used the MRAP for protest purposes, other departments did, like in Ferguson, Missouri. MPD was criticized for using the vehicle by the local chapter of the NAACP.

Patterson said the large vehicle also posed other problems, like being restrictively heavy to drive on some roads, being difficult for mechanics to maintain and needing to be driven around the city regularly to keep fluid in the engine lines.

So, Patterson said, they looked for another hand-me-down.

"Now that this opportunity has presented itself to get the used vehicle from the Sheriff's Department it's time to move on and decommission this vehicle off to someone else," Patterson said.

The old MRAP is on its way to West Allis where they share an armored option with the county.

Madison is looking forward to a new shield for officers that the department needs less shielding from.

"I think a lot of people are happy to see it go and to be honest I am too," Patterson said.

Madison police say the new Bearcat will only be used in dire and emergency circumstances.