Hank the Dog gets a new home at Miller Park 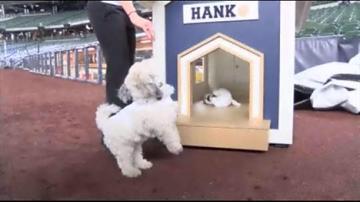 MILWAUKEE -- Hank will have another new home - this one in centerfield.  That's where the one-bedroom dog house will be for now.

The one-bedroom, Cape-Cod style home will move around Miller Park throughout the year.  It'll be an easier way to showcase the ballpark pup and his booming popularity.

The dog house will be where he does his photo ops and other appearances.

It's been a whirlwind two months for Hank.  He wandered into spring training February 17th.  Since then, he's grabbed attention across the country.  One month later he arrived in Milwaukee for the first time.   And now he'll get a home inside Miller Park.

Hank will also get one of the best honors his own bobblehead --- or it's called BobbleHank.  The Brewers will give those away September 13 at Miller Park to all fans.