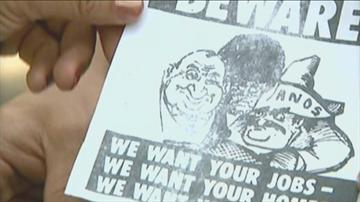 HAMPTON BAYS, N.Y. -- Some homeowners in the Hamptons are puzzled and angry after finding recruitment pamphlets for the Ku Klux Klan at their homes, CBS New York station WCBS-TV reports.

Fernando Alvarez said he found the fliers under his Hampton Bays door. His family was left wondering if they were targets of the hate group or if the leafleting was random.

\"We were really shocked that ... in this area we can have KKK,\" Alvarez said.

Hampton Bays, the town of Southampton's most populous hamlet, has 13,000 residents - 30 percent of whom are Hispanic.

Brandon Scibek, a Hampton Bays homeowner, said he, too, received the pamphlet.

\"It's unfortunate,\" he said. \"But it's not something you can really prevent. It's covered under freedom of speech.\"

Others on Columbine Avenue who found the fliers stuffed into their mailboxes were at a loss to explain why bigotry over race and ethnicity would rear its ugly head there.

Local community center St. Rosalie's said those responsible for the fliers are a small group of people living in the past.

\"These people came in the middle of the night,\" Sister Mary Beth Moore said. \"We know somebody heard their dogs barking at midnight. These are people who are not honorable enough to share their point of view in the daylight, and we hope they go back to North Carolina, where their horrible little pamphlets came from.\"

The Loyal White Knights, a KKK branch based in the South, referred WCBS-TV to its grand dragon, Robert Jones. He said he is unaware of the efforts in the Hamptons but added: \"Everybody's fed up with immigration ... that is why we have so many people from New York calling right now.\"

Police said the action is not criminal thus far.

\"No charges at this time,\" said Southampton Town Police Sgt. Susan Ralph. \"Right now, it's relating to freedom of speech. We have referred the incident to Suffolk County Police Department's bias crimes unit.\"

Southampton Town Supervisor Anna Throne-Holst said the KKK is looking for attention and that residents should be careful not to overrespond, adding they should rip up and throw away the literature.

Community advocates vowed to rally against the KKK if more recruitment pamphlets appear.