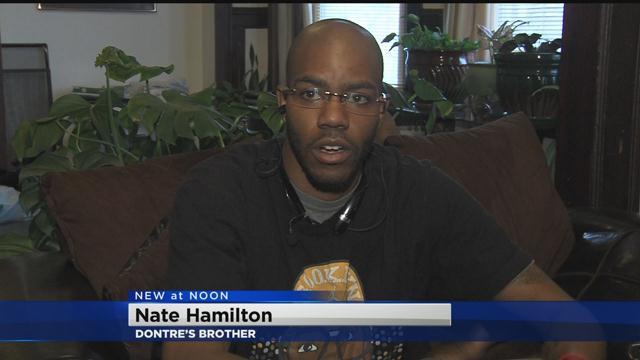 Dontre Hamilton, the man who was shot and killed by a former Milwaukee Police Officer in 2014 is now part in the presidential race.

Hamilton was one of several people who died after having contact with police and is now featured in a new ad campaign from presidential hopeful Hillary Clinton.

The new 30 second commercial was released over the weekend in South Carolina.

Morgan Freeman voices the commercial and says Hillary Clinton makes the victims mothers fight for justice her own.

He said he's proud an issue being fought so hard here in Milwaukee is being pushed into the national spotlight.

CBS 58 asked if he felt like the campaign was exploiting the family’s tragedy.

He said not at all.  While Clinton is using his death to help push her cause, they can in return use what she is doing to push their cause and build momentum.

Hamilton said he hopes if elected, Clinton will follow through with what she is promising.

"We’re just hoping she’s going in with that bulldog attitude if she elected and she creates a society where unarmed men and woman are not killed. And if they are killed, we take a magnify glass and we blow this picture up to see what is the issue is and to see what is the real problem," said Nate Hamilton, Dontre's brother.

The ad also talks about the water crisis in flint and saving President Obama's legacy.

Hamilton's mother is in South Carolina this week on the campaign trail with Clinton ahead of Saturday's Democratic primary there.

Even though the ad describes Hamilton as unarmed, the investigation into what happened in Red Arrow Park concluded that Hamilton had used the officer's baton in a struggle.

Hamilton's DNA was found on the handle of the baton.

In particular, he use of a pat down on Hamilton.

Workers at Starbucks had complained that Hamilton was lying down near their condiments table that was set up outside because of renovations that were happening to the coffee shop.

The Milwaukee County D.A. determined that Manney's use of force was justified considering the physical struggle he was engaged in at the time he opened fire.

"Hilary Clinton’s statement that Dontre Hamilton was unarmed is misleading… untrue!     Clearly our officer was disarmed of his baton – that baton in turn was used as a deadly weapon upon our officer; ultimately no choice remained.  Therefore, Dontre’s arming himself caused the use of deadly force.  The outcome was an absolute tragedy.  The Milwaukee Police Association and specifically the officer involved continue to pray for peace for the Hamilton family."