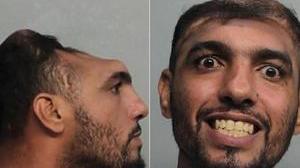 (CBSNews) MIAMI -- A man with a deformed skull who was widely known as the “Half-Head Man” was arrested in Miami Monday after allegedly setting fire to his mattress while two people were inside the adjacent home in the duplex where he lived,reports CBS affiliate WPEC.

Miami Police say 31-year-old Carlos Rodriguez is reportedly facing arson and attempted murder charges. Police say the mattress in his room in the duplex owned by his mother appeared to have been lit aflame with igniting fuel.

Officers and firefighters responded to a 911 call around 2:30 p.m. reporting someone had just set a mattress on fire. Police say the blaze threatened the lives of his two neighbors, WPEC reports.

Rodriguez made the news in 2012 when he appeared in a viral YouTube video explaining how he lost a large portion of his brain and skull after crashing his car into a telephone pole and being ejected from the vehicle. In the video, he says he was high on drugs at the time of the crash.