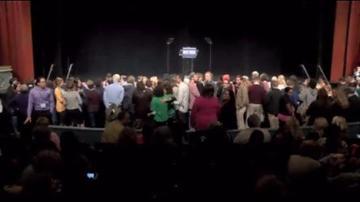 MADISON -- A representative from a \"conservative news organization\" was barred from attending Tuesday's Mary Burke campaign event in Madison, and the exchange with Democratic Party officials was caught on video.

Adam Tobias, from an online group called Wisconsin Reporter, was denied credentials to the event with First Lady Michelle Obama.

He recorded a conversation he says happened Monday between himself and Democratic Party of Wisconsin spokeswoman Melissa Baldauff. At the end of the video, Baldauff tells Tobias he is not a member of the press.

Tobias told us, he was surprised he wasn't allowed into the event as a member of the press.
Baldauff said Tobias should not have been surprised, and backed up the comments she made to him saying \"Wisconsin Reporter is a right wing issue advocacy group funded by other right wing special interest groups like The Bradley Foundation and Franklin Center.\"

Wisconsin Reporter is not only funded by the non-profit Franklin Center for Government and Public Integrity, but it's also operated by the organization. Franklin Center president, Jason Stverak, said in a statement, \"The Franklin Center fosters aggressive investigative reporting that shines a light on government agencies and keeps public officials accountable. We'll continue to report the truth, and won't be deterred by petty, partisan politics.\"

Baldauff explained denying Tobias credentials saying, \"We have never credentialed Wisconsin Reporter for any event, nor have we credentialed any right-wing groups like Media Trackers, Right Wisconsin, or MacIver Institute.\"

A UW-Madison journalism professor Robert Drechsel says with so many websites being presented as news outlets, the lines have never been more blurred over who is and is not a member of the press. He said, \"It puts more of a burden on audience certainly to approach any kind of information source carefully. And make sure as best they can they develop an understanding where that source is coming from, what kind of perspective it's bringing to things.\"

Drechsel says in the case of Wisconsin Reporter, it's not hard to see why it's questioned. \"It's a different kind of an entity because it does come with a perspective, there's no question about that. But there's perspective in traditional journalism too, traditionally confined to the editorial pages of newspapers and so on.\" he said.

Drechsel says political parties should put clear guidelines in place on the types of outlets that will and won't be credentialed for campaign events.