Group says there are thousands of untested "rape kits" in Wisconsin 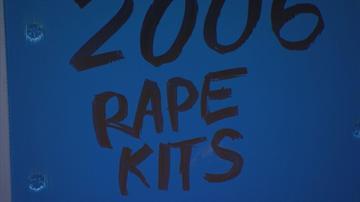 Friday it announced it uncovered a backlog of rape kits that sit untested around the country.
According to the group, the Wisconsin Attorney General's office sent a letter showing a backlog of 2,655 rape kits sitting on Milwaukee Police Department shelves.

Joyful Hearts' vice president, Sarah Tofte, says a backlog exists in every part of the country and when talking about Milwaukee said. \"It's a real sign it's time for a city to look at what it's doing to investigate sexual assault cases.\" she said.

According to the letter from Attorney General J.B. Van Hollen's office, police departments around the state were asked to report how many untested rape kits they're holding.
The survey shows a statewide backlog of 6,006 untested rape kits, and that number may not be complete because it comes from the 81 percent of police departments who actually responded to Van Hollen's office.

Back in 2011, Van Hollen created the Sexual Assault Response Team, part of its job is to work on the backlog.
Friday, Van Hollen's office did not respond to our multiple requests for comment.

\"The New York-based Joyful Heart Foundation issued a misleading media release today implying that the Milwaukee Police Department is failing to send \"rape kits\" for analysis, causing cases to go unsolved.  While the media release does accurately indicate how many kits have been collected by MPD and not sent for analysis, it fails to offer any context regarding the reasoning for not sending all collected kits to crime lab nor does the release provide context on the number of years the untested kits cover.

No backlog of untested \"rape kits\" exists in the Milwaukee Police Department and in fact, the use of the term \"rape kit\" is in itself misleading.  The evidence collection hospital kits are not exclusively used for the collection of evidence related to \"rape.\"  The kits are used for all levels of sexual assault where the collection of evidence is of value.  Evidence collection hospital kits where consent is given by the victim and where the testing is needed for suspect identification or prosecution have been sent to the Wisconsin Crime Lab.  The 2,655 kits the Joyful Heart Foundation refers to as a backlog have not been sent for analysis because the victim has requested that the kit not be tested, because sexual contact between the victim and the suspect is not in dispute and the evidence is not needed for successful prosecution, or because the investigation revealed that the allegation is unfounded.  The Milwaukee Police Department works closely with the Milwaukee County District Attorney's Office to determine when kits should be sent to the crime lab to aid their prosecution.

Unlike other cities included in the release, Joyful Heart failed to include a timeframe for the collection of the untested kits in Milwaukee.  The 2,655 kits the Joyful Heart media release referred to dates back to 1997 and average about 150 per year.

The Milwaukee Police Department recognizes the value of DNA collection and has long been a regional and national leader on the subject.  In fact, MPD was recently recognized for bringing the first use of so-called \"familial DNA\" analysis to Wisconsin.  Additionally, MPD has applied for grant opportunities at the federal level to increase our ability to connect cases with the use of DNA and will continue to seek additional funding for these important investigations.\"

\"As Attorney General, I will work with local police departments to eliminate any backlog they may have to make sure victims get the justice they deserve. That's why my plan to combat violence against women includes provisions to commit the Crime Lab to prioritize the processing of blood and urine samples from victims in cases where date rape drugs are suspected to be involved, and expand Sexual Assault Review Teams (SARTs) and Sexual Assault Nurse Examiner (SANE) programs statewide.\" Schimel said.

\"Cleaning up the rape kit testing backlog will require a multi-faceted approach to increasing both the speed of testing and the capacity to test such evidence. We first should look toward federal resources for that help subsidize these costs. We must invest in state of the art equipment, which allows multiple samples to be tested simultaneously. We must also ensure that the crime labs have the capacity--both in terms of personnel and space--to allow for this testing is done.” Happ said.