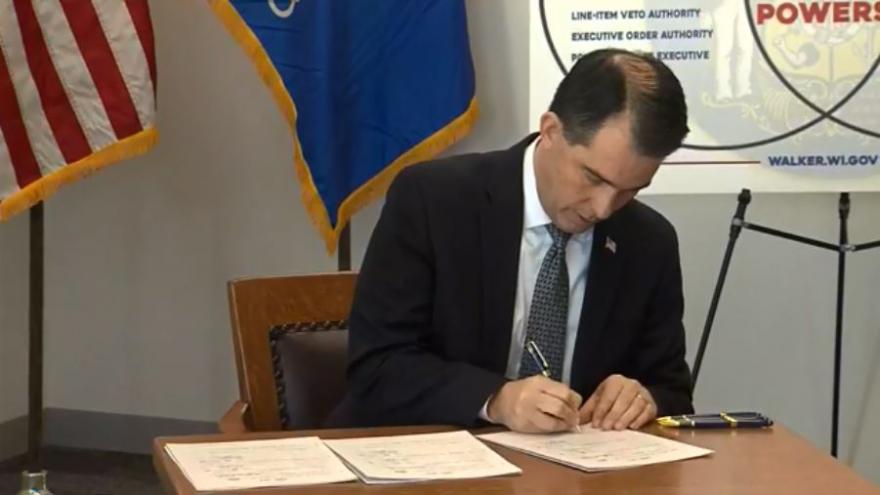 The Republican governor signed it Friday after the Legislature passed it in a lame-duck session last week.

Early voting would be limited to no more than two weeks before an election under the bill Walker signed.

Holder says in a statement that's a "shameful attack on our democracy."

Holder's group the National Redistricting Foundation will pursue legal action along with the Wisconsin-based liberal group One Wisconsin Now.

The groups successfully sued in federal court in 2016 to overturn similar early voting and other restrictions enacted by Walker.

Democratic Gov.-elect Tony Evers says he's reviewing his options on how to stop lame-duck legislation that weakens his authority.

Evers held a brief news conference to rail against the bills, saying the legislation was created without accountability and transparency and was aimed at reversing the Nov. 6 election.

Evers said he's reviewing his options and will do everything he can to ensure the people of the state aren't overlooked or ignored. He didn't elaborate and quickly left the news conference after five minutes without answering any questions. He tried to leave through a glass door that was marked as locked as a reporter shouted questions at him. A member of his staff showed him out through a different door.

The legislation prohibits Evers from withdrawing from a multistate lawsuit challenging the Affordable Care Act. The package also shields the state's job-creation agency from Evers' control until September and limits his ability to enact administrative rules.

The bills dramatically reduce Kaul's powers. The legislation allows lawmakers to intervene in state lawsuits, eliminates the state Justice Department's solicitor general's office, requires Kaul get lawmakers' approval before settling cases and sends all settlement money to the state's general fund rather than to the Justice Department.

Kaul issued a statement Friday saying the "stunningly bad" legislation is designed to diminish the impact of the November election on Republicans.

Kaul has predicted the legislation would spark multiple lawsuits. He didn't say in the statement if he would sue, however. His spokeswoman, Gillian Drummond, didn't immediately reply to an email.