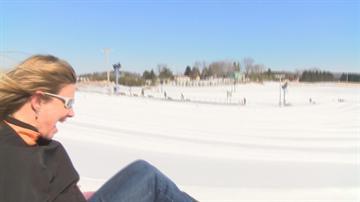 KEWASKUM -- Skiing, snowboarding and tubing draw people to Sunburst Winter Park from miles away.  But most people don't think about all the work it takes to keep the hills there in top notch shape.

Working late into the evening to make sure you enjoy the slopes during the day.

\"It seems to be simple on the surface, but there is quite a lot to it,\" Finck said.

Finck runs one of the four snowcats that smooth and pack the snow.  They need to do their work overnight, running up and down the hills after customers all go home.

\"We go out and we power till the surfaces,\" Finck said.  \"We not only do that, but we also move the snow with the blade and roll  it over so we've got that nice corduroy surface for the guests the next morning.\"

Grooming the slopes takes anywhere from four to eight hours.  Snow and cold don't bother drivers as much as rain.  But Finck says thanks to Sunburst's man-made snow pack, even rain isn't so bad.

\"It compacts much better than natural snow does so the rain event doesn't affect it, it tends to percolate right  through it, we put a power till on it and it turns out very nice and very skiable,\" Finck said.

General Manager Steve Voss oversees everything, including grooming and snowmaking.  His team generates enough snow at the start of winter to cover about 50 acres several feet deep.

\"If there wasn't snowmaking available, you probably wouldn't have skiing in southeastern Wisconsin,\" Voss said.

That means draining the park's retention pond up to five times.  But the pond gets refilled when the snow melts until the next winter rolls around.

\"We do it for everyone else's enjoyment,\" Voss said.  \"Occasionally we get out on it ourselves, but just come out and use it.\"

\"Every day you get to see the people use your product, so the payback is almost immediate, which is really nice,\" Finck said.

Sunburst management tells CBS-58 they'll keep good snow on the hills for about another month into mid-March.