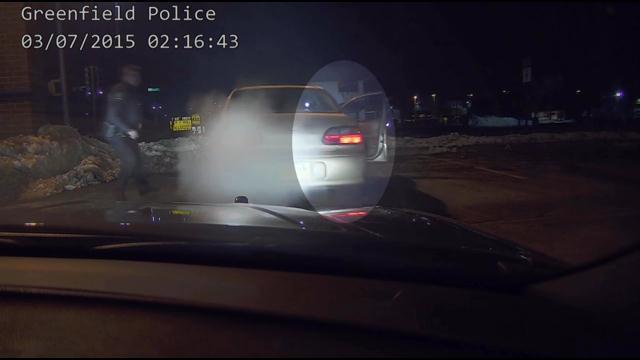 A squad car camera captured the moment when a Greenfield police officer jumped into action as a suspect tried to flee during a traffic stop. The officer could have been seriously hurt, even killed, if it wasn't for his quick actions.

It all started with a routine traffic stop on Saturday for Greenfield police officer Matthew Noah.

\"We've had a lot of business burglaries lately, so the officer is checking different strip malls in the city and he comes across this occupied vehicle,\" said Captain David Patrick from the Greenfield Police Department.

The occupied vehicle was in the parking lot of a strip mall on 75th Street and West Layton avenue.

Officer Noah started questioning the suspect in the car, later identified as Kevin Taylor, because he noticed the car smelled like marijuana.

\"You can see (in the video) while the officer is talking to the suspect, he keeps opening the door not following directions,\" said Captain Patrick.

That's when the officer called for help. A few minutes later, another officer arrived, and the suspect panicked.

Squad car video shows the driver put the car in reverse, forcing officer Noah to jump in the car while it was moving. A split second decision to get out of the way and save his own life.

\"We've had people take off from us but this was a little bit different because the door was open and the officer could've easily been swept under,\" said Captain Patrick.

Once inside the vehicle, officer Noah struggled to stop the driver, but was successful.

Taylor was arrested and is now facing criminal charges.

\"He had recently gotten out of jail on a very similar incident where he dragged an officer at 35 miles-per-hour... he's a dangerous person,\" said Captain Patrick.

As for the officer, Captain Patrick said he's doing okay, only suffered a few scrapes and bruises and is already back at work.
Share this article: