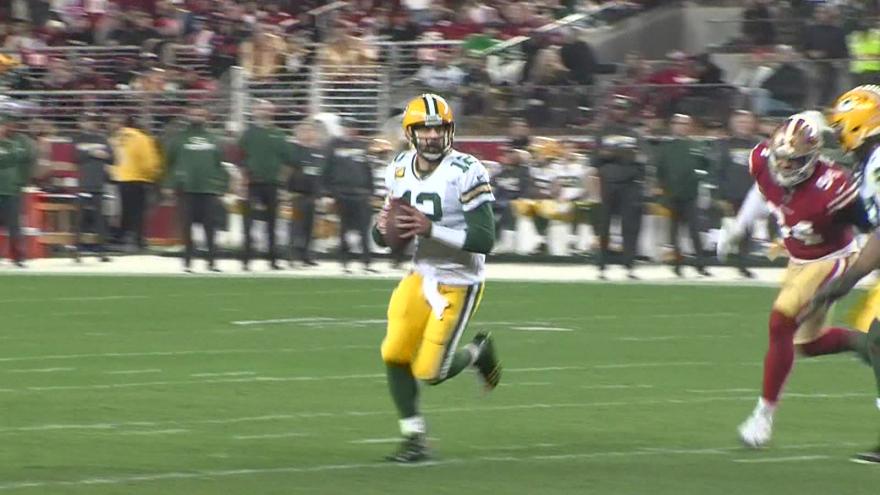 .@AaronRodgers12 walks off the field one win short of the Super Bowl. Still an incredible season for the #Packers in the first year of the @CoachMLaFleur era. pic.twitter.com/rwSRj48u7S

? @AaronRodgers12 getting ready for the NFC title game. #GBvsSF | #GoPackGopic.twitter.com/a4hjfWV7vx

The 49ers scored first on their second drive, going up 7-0 on a 36-yard run by Raheem Mostert.

The Packers got the ball back after the score, but failed to move it, and were forced to punt.

The 49ers got a nice punt return, but were unable to do anything with the ball and were sacked on third down and forced to kick a long field goal. The 49ers hit the 54-yarder and now lead 10-0.

When the Packers got the ball back, they went nowhere and were forced to punt. The punt only went 20 yards, setting up the 49ers with a short field.

On the Packers next possession, the team finally started getting something going, picking up some first downs. However, a fumbled snap by Aaron Rodgers turned the ball over to the 49ers. Score remained 17-0, 49ers.

The 49ers continued to run the ball hard against the Packers with Mostert. The Packers were finally able to make a stop on third down with 2:00 remaining, forcing the 49ers to kick a short field goal, which they made. With 1:57 left in the first half, score of 20-0, 49ers.

The Packers, wanting to get to halftime, tried to run out the clock before punting the ball away. At halftime, it's a 27-0 lead for the 49ers.

After halftime, the Packers took the kickoff and drove right down the field, finally scoring their first points. Score of 27-7, 49ers with 8:44 left in the third quarter.

On the 49ers next possession, they continued to run the ball all over the Packers. They added a fourth touchdown by Mostert. Score of 34-7 with 4:49 remaining in the third quarter.

The Packers added two touchdowns before the end of the game and the 49ers added a field goal making it 37-20 with 3:31 remaining in the game.

The Packers ended the game with a Rodgers interception. The Packers fell to the 49ers 37-20.

Aaron Rodgers threw for 326 yards but the Packers lost the NFC title game for the third time since their last Super Bowl trip following the 2010 season.