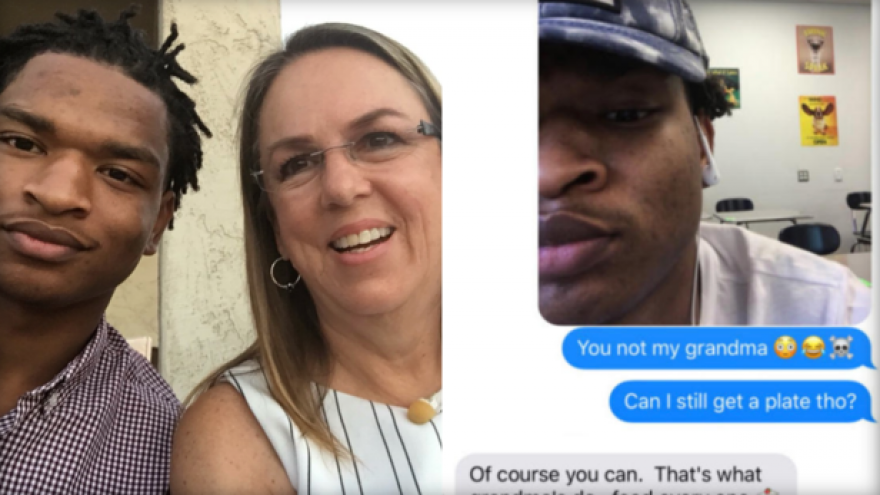 What started as a Thanksgiving text mix-up has turned into an annual tradition for Jamal Hinton and Wanda Dench. Their unusual friendship was sparked just over a year ago when Hinton got a text from his supposed "grandma" inviting him to Thanksgiving dinner.

The skeptical teen knew there had to be some kind of mistake — his grandma wasn't a texter. When the woman from Mesa, Arizona, sent him a selfie, he laughed.

"You not my grandma," joked Hinton, sending a selfie right back. "Can I still get a plate tho?"

Wanda Dench didn't skip a beat. Within seconds, she replied, "Of course you can. That's what grandma's do...feed everyone."

She invited him to join her family for dinner — and this year they kept the tradition going. The invitation is always open, Dench told the teenager.

On Thursday, Hinton drove 40 minutes from his home in Tempe, Arizona, to return to Dench's house for the holiday with pumpkin pie in hand.

"It was important for me to stay connected with this family because they are like my family," Hinton told CBS News. "They are so welcoming and nice."

A lot has happened since their hilarious mix-up went viral last year with more than 30,000 retweets on Twitter. Hinton turned 18, graduated from high school, got a girlfriend and began his very first job as a butcher at Fry's Restaurant.

Somebody grandma is coming in clutch this year!! Ayee!!! pic.twitter.com/QGrx83nHLl

"We both went through a lot this past year," explained Hinton, adding that Dench is still working at the Salt River Project, the local power and water utility.

"She's not 'kind of' a grandma; I consider her my grandma," Hinton said.

And Dench feels the same way.

"For him to continue with the relationship, I'm just really pleasantly surprised," Dench told the Arizona Republic. "We're more of [an] extended family and, best of all, friends."

This Thanksgiving was more relaxing than the last, Hinton said, as the pair has gotten to know each other better over the past 12 months.

"The Thanksgiving this year was way less crazy," Hinton added. "We had a good time with us, her grandson, his girlfriend, Wanda and her husband. We all got to know each other more and actually were able to sit and talk."

Like any good grandmother, Dench made sure to impart wisdom to her "kids" -- including Hinton.

"The advice that she has given me is go after what you believe in," he said.

She also taught by example to treat others the way you want to be treated.

"Because when you treat people how you'd like to be treated then they tend to treat you the same," he added.