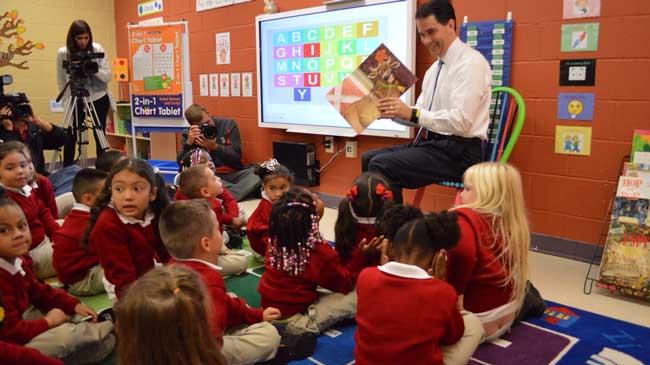 Governor Scott Walker has spent most of the last few months campaigning for president, but now that he's out of the race, he has been seen in Wisconsin with increasing frequency.

“We want kids to have as many choices as possible and ultimately we put our trust in the hands of parents to make the right choice for their sons and daughters,” responded Governor Walker. This was in reference to parents making a choice on enlisting their children in public or private education options.

As it was expected, he answered questions that are concerning our state at this moment, while he had campaigning across the country. He assures he will be here to deal with those issues.

“If there is a republican president I will not be part of the cabin. I enjoy being governor. My main focus is to be governor for the next three years. Sometime between now and November 2018 to make a decision whether or not I will seek a third term”, said Walker.

He sidestepped a question about whether he would agree to be a running mate for the GOP presidential nominee.

Walker preferred to talk about state and local matters, like GE’S announcement yesterday that it's moving its Waukesha plant to Canada.

“It has everything to do with the larger battle in Washington DC but we are going to do our best to provide as many options. Just as we have actively have  reached out talking to GE in a larger context about where some of their corporate  headquarters, or components of that might be in light of decisions they made this  past year”, claims Walker.

The governor also spoke about the new candidates to fill the Supreme Court seat after the passing of justice Crooks. He says he will focus on finding a man or woman of integrity, someone who understands the law, but made no mention of which candidates he has in mind.