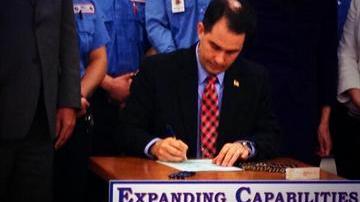 MILWAUKEE-- Gov. Scott Walker signed a series of anti-heroin bills into law.  The bills make up the \"Heroin Opiate Prevention Education\" Agenda, also known as \"HOPE.\"  One bill will give all ambulance services access to Narcan-- an injection that counteracts the effects of heroin.

\"Previously, this medication was only available at the advanced EMT levels and paramedic levels,\" said Jim Lombardo, Executive Vice President of Bell Ambulance.

\"You always go to bed at fearing whether tonight's the night a phone call comes,\" he said, recalling his daughter's battle with heroin.

Rep. Nygren still remembers rushing to his daughter's side when she overdosed on heroin.

\"I was able to race over, held my daughter in my arms, needles still in it from the heroin,\" he said.

The Nygren Family's story is just one of many in Wisconsin.

\"This has become an epidemic across the state,\" said Gov. Walker.

Nygren hopes this new law will prevent tragedies and help families win their fight against addiction.

\"Personal experiences that we had as a family, kind of act as a call to action to help our community, help our state,\" said Nygren.