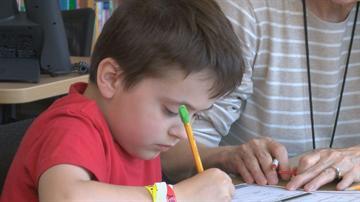 MADISON --  It's a change that could have a dramatic impact on public school districts all over the state, and the proposal came from Governor Scott Walker Wednesday. Walker told reporters in Milwaukee, then in the Madison area,  he supports scaling back or even completely lifting an enrollment cap for voucher schools in the state if he's re-elected.

Walker expanded on those comments after a tour at a Madison area business Wednesday. Saying an achievement gap for African-American children could be closed if the state allows more parents to choose where their kids go to school.

Milwaukee and Racine already offer the type of plan Walker is talking about, but Walker says he wants to see this statewide. Lifting an enrollment cap would basically allow more parents to send their kids to private schools, and have taxpayer money pay for some or all of the cost.

\"I want great public schools, but I also know that having families. Particularly low income families, having choices is not only good for those families and sons and daughters, I think it puts pressure on other public schools like Madison's to use our reforms to the fullest extent possible.\" Walker said.

In an email from Democratic gubernatorial candidate Mary Burke, she brushed off Walker's comments off as political rhetoric with no real planning behind it.

“This just seems to me like a career politician throwing out ideas 60 days before an election with no plan for how they’re going to be funded. If you do just a rough calculation – lets say you opened this up statewide to all low and middle-income students, it’s not unrealistic to think that you could have 100,000 students statewide in this program – whether it’s charters or vouchers – at the amount per student in the 2014-15 budget you're talking about $721 million year based on 100,000 students. Before committing to another unfunded entitlement program I think Governor Walker needs to outline how he's going to pay for that.”, Burke said.

Other democrats have come out criticizing private voucher schools today saying they are not held accountable, and students in public schools continue to outperform those who go to private schools.