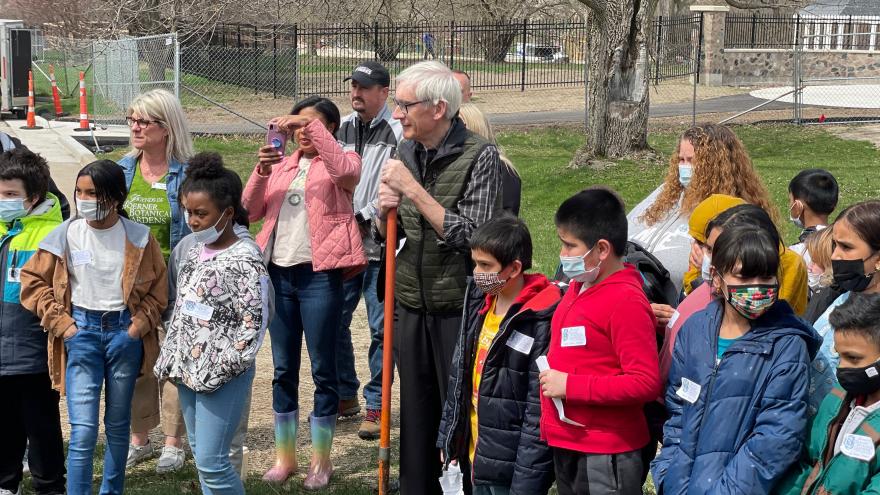 The pledge is expected to result in nearly 29 million metric tons of carbon dioxide stored over the next 50 years, according to a press release.

“Planting and conserving trees and forests is a simple and powerful tool for storing carbon and tackling climate change, and I’m excited about the progress we’ve made on Wisconsin’s pledge to plant 75 million trees by 2030,” Evers said. “Wisconsin’s pledge builds on the good work being done by the forestry community to help safeguard water resources, provide wildlife habitat, and support rural economies by sustainably managing Wisconsin’s 17 million acres of vast and valuable forests. This announcement also gets us closer to reaching our goals of a cleaner, healthier, and more resilient environment that will support the sustainable future Wisconsinites are ready for.”

Learned a great #ArborDay joke from a student in Hales Corners today!

Q: What does a tree drink? ??? pic.twitter.com/CnnyjvC3eI

The Wisconsin Department of Natural Resources' (DNR) annual report shows the DNR supplied 2.7 million seedlings planted on private lands, 1.1 million on DNR lands, more than 500,000 in county forests, more than 42,000 in school forests, and more than 45,000 given to elementary school students.

The DNR reports distributing 31.4 million seeds, which will likely grow into about 3.5 million trees, according to a press release.

“The goal is to use trees and forests as a critical nature-based solution to climate change,” DNR Secretary Preston Cole said. “When fully realized, the governor’s pledge is estimated to store nearly 29 million metric tons of carbon dioxide over the next 50 years in our forests and trees. That’s about the same amount of carbon dioxide produced by 6 million cars in a year. DNR staff are producing seedlings in concert with private nurseries, not only meeting the needs of the growing public, but doing so in a manner in which we are fostering genetic diversity and looking for species that will thrive in our warming climate.”