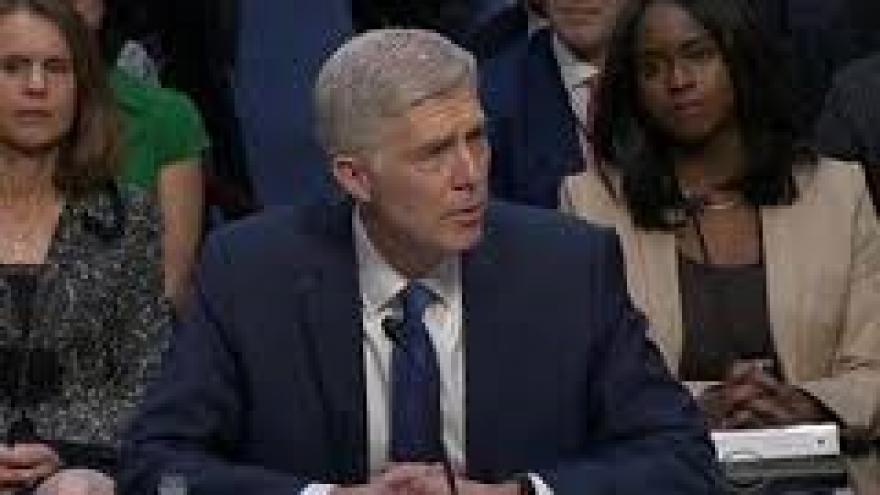 Washington (CNN)After more than three hours of listening, Judge Neil Gorsuch finally spoke up at his own confirmation hearing sending a message of unity despite the fraught atmosphere surrounding his nomination.

"Long before we are Republicans or Democrats -- we are Americans," the 49-year-old federal judge said.

Monday was the first day of four hearings on Gorsuch a federal appeals court judge from Colorado, likely to carry on the conservative legacy of the late Justice Antonin Scalia and be an early legacy-establishing win for President Donald Trump.

It was also a setting for Democrats to revisit their feelings about the snub last year of President Barack Obama's nominee, Judge Merrick Garland.

Acknowledging the political nature of his nomination and confirmation hearings, Gorsuch pushed back at those who describe judges as "politicians in robes."

"I have watched my colleagues spend long days worrying over cases," he said. "Sometimes the answers follow us home and keep us up at night."

Without mentioning Trump's recent attacks on judges, he praised his bretheren.

"I want to thank my fellow judges across the country. Judging is sometimes a lonely and hard job. But I have seen how these men and women work with courage and collegiality, independence and integrity. Their work helps make the promises of our Constitution and laws real for us all."

Gorsuch also stressed the limited role of the judge. "I am humbled to he here," he said. "Ours is a judiciary of honest black polyester."

And he stressed that people often overlook that judges are often unanimous. "I wonder if people realize that Justices (Clarence) Thomas and (Sonia) Sotomayor agree about 60% of the time, or that Justices Scalia and (Stephen) Breyer agreed even more often than that," he said.Gorsuch's statement came after four hours of speeches from senators, and repeated cries from Democrats angry about what happened -- or didn't happen -- last year after the death of Justice Antonin Scalia.Sen. Patrick Leahy called it an "extraordinary blockade" that was "totally unprecedented in our country's whole history."

Leahy criticized Trump for relying on conservative groups like the Heritage Foundation and Federalist Society last year to vet and recommend his list of potential Supreme Court picks.

"Senate Republicans made a big show last year about respecting the voice of the American people in this process," he said, referring to Trump's election victory. "Now they're arguing that the Senate should rubber-stamp their nominees selected by extreme interest groups and nominated by a president who lost the popular vote by nearly 3 million votes."

Cruz sharply defended Republicans' decision to hold the seat vacant, saying the presidential election was also a "referendum on the kind of justice that should replace Justice Scalia."

"Given the engagement of the electorate nationally on this central issue, I would suggest that Judge Gorsuch is no ordinary nominee," Cruz said.

"Because of this unique and transparent process -- unprecedented in the nation's history -- his nomination carries with it a super legitimacy," he continued. "The American people played a very direct role in helping choose this nominee."

Democratic Sen. Dick Durbin said the actions blocking Garland and subsequent Gorsuch nomination "is part of a Republican strategy to capture our judicial branch of government. That is why the Senate Republicans kept the Supreme Court seat vacant for more than a year and why they left 30 judicial nominees who had received bipartisan approval of this committee to die on the Senate calendar as President Obama left office."

Leahy said the GOP is conducting "court unpacking scheme," harkening back to President Franklin D. Roosevelt's failed effort in the 1930s to pack the Supreme Court with more justices, a move lawmakers rejected.

"Remember the Judiciary Committee once stood against a court-packing scheme of a Democratic president that would have eroded judicial independence, and that was a proud moment," Leahy said. "Now Republicans on this committee are guilty of their own court-unpacking scheme."Judiciary Chairman Chuck Grassley, R-Iowa, used his opening statement to decry "executive overreach" and expressed "alarm" over "the threat it poses to the separation of powers."

Discussing the need for an independent jurist, Grassley said, "Good judges understand this. They know it isn't their job to fix the law. In a democracy, that right belongs to be the people."Democrats will also use the hearing to go after Trump's early actions such as his travel ban for people from seven -- then revised to six -- majority-Muslim countries, which has been blocked by federal courts from coast to coast.

The question, California Sen. Dianne Feinstein said of Gorsuch, is "whether he will protect the legal and constitutional rights of all Americans."

"President Trump repeatedly promised to appoint someone in the mold of Justice Scalia," she said, "and that the nomination of Judge Gorsuch illustrates that he is a man of his word. For those of us on this side, our job is not to theoretically evaluate this or that legal doctrine, or to review Judge Gorsuch's record in a vacuum. Our job is to determine whether Judge Gorsuch is a reasonable mainstream conservative or is he not."Turning to his own inspirations, Gorsuch praised his wife Louise and then stopped—mid statement -- to hug her. His voice cracked as he talked about an uncle he had just lost.

Of his former boss, Justice Anthony Kennedy, Gorsuch said, "he showed me that judges can disagree without being disagreeable."

And he joked that Scalia, his ideological ally, and sometimes fishing partner was a mentor too.

"The justice fished with the enthusiasm of a New Yorker. He thought the harder you slapped the line on the water, somehow the more the fish would love it. "

"In Colorado today, there is God and John Elway and Peyton Manning. In my childhood it was God and Byron White," Gorsuch said.

Elway, as it happens, sent a letter to the Senate endorsing Gorsuch Monday.Gorsuch's nomination has flown under the radar in Washington as the focus has been on the litany of Trump actions such as the travel ban, budget proposal that would cut billions of dollars from agencies, executive orders and claims about Obama wiretapping Trump Tower. At the same time, Republicans are pushing through legislation to repeal and replace Obamacare.About a dozen people in the audience are wearing red "stop Gorsuch" shirts.

Grassley announced he expects a committee vote on Gorsuch's nomination on April 3.