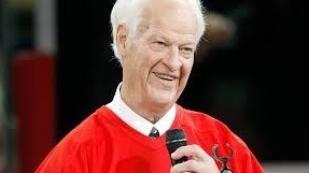 Gordie Howe, one of the greatest hockey players ever to lace up skates, has died at 88 years old. The Detroit Red Wings, with whom Howe had spent 25 years of his lengthy playing career, confirmed the news Friday morning.Howe was truly one of the giants in the game. Affectionately known around the world as "Mr. Hockey," Howe was one of the game's most prolific scorers and toughest competitors, embodying both the grace and brutality of the sport he helped popularize in the United States. Even in his post-playing career, which did not end until he was 52 years old, Mr. Hockey was one of the sport's greatest ambassadors.

With a record 1,767 games played in the NHL, mostly with Detroit, but also with the Hartford Whalers, and an additional 419 in the short-lived World Hockey Association, Howe's passion and perseverance was unrivaled. He won four Stanley Cups with the Red Wings and two WHA titles while playing alongside his sons, Mark and Marty, for the Houston Aeros.

He is second all-time in the NHL with 801 career goals and fourth all-time with 1,850 points. He won both the Hart Trophy as the league's MVP and the Art Ross Trophy as scoring champion six times. He appeared in the NHL All-Star game 23 times, including in his final season in 1980 as a 51-year-old man. Howe was also voted as a first- or second-team All-Star 21 times in the NHL and twice in the WHA.

While his scoring numbers were prolific, the violence with which Howe played is very much part of his lore. There's a reason he used to pose for pictures with fans with his elbows up in their face. He racked up 1,685 penalty minutes in the NHL and another 399 in the WHA. Mr. Hockey was the furthest thing from Mr. Nice Guy on the ice. That part of his game made him more than just a great player, it helped turn him into a folk hero.Howe had actually retired following the 1970-71 season and he was inducted into the Hockey Hall of Fame in 1972. However, he came out of retirement to join his sons in Houston and help jump-start the fledgling WHA in 1973. That deal was primarily engineered by his late wife Colleen, who was a massive figure in the game herself.

Howe's short-lived retirement turned into seven more years of professional hockey at a high level, six in the WHA and one final go at the NHL before retiring for good at age 52. He will probably be the last hockey player whose career touched five different decades, as his first season started in 1946 and his last ended in 1980.In his final NHL season, a grey-haired Howe put up 41 points in 80 games with Hartford. He played in the NHL All-Star Game, lining up across from Wayne Gretzky who deeply idolized Howe as a child himself. Gretzky would go on to break most of Howe's long-standing records, sometimes with Howe in the building as he did it.He was a hockey lifer in every sense of the word, always close to the game when his health would allow. There wasn't an item that would go unsigned or a hand he wouldn't shake. He knew his stature gave him some amount of responsibility and as a result, his impact on the sport was gigantic on both sides of the border separating the U.S. and Canada.

In recent years, Mr. Hockey's visibility in the public has dwindled. Howe suffered a serious stroke in October 2014 that had left him largely incapacitated. However, in true Mr. Hockey fashion, Howe kept fighting. Later that year, he underwent a stem-cell treatment that his family said helped vastly improved his condition.

By February 2015, he was able to make his first public appearance in his native Saskatchewan. And just this past March, Howe attended a Red Wings game ahead of his 88th birthday.Howe is survived by his four children, fellow Hockey Hall of Famer Mark, Marty, Murray and Cathy, and numerous grandchildren. He was preceded in death by his beloved wife Colleen.