MILWAUKEE (CBS 58) – Assembly Republicans rolled out proposals for how they want some of the more than $3 billion under state discretion to be spent to help the state’s economy recover from the pandemic. 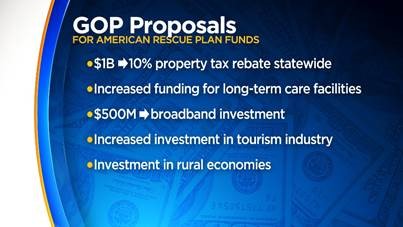 “We certainly want to make sure we use this one-time money for one-time investments,” Assembly Speaker Robin Vos (R – Rochester) told reporters at a news conference, Tuesday, March 30. “Not to grow the size of government or make up for things government has had to struggle with, we want to focus it on the private sector.”

Republicans said they were disappointed in Governor Tony Evers’ veto this week of a bill to allow legislative oversight over allocations of the funds. Evers said he was concerned that oversight would slow the release of the funds. The GOP hopes the governor works with them to distribute the relief.

“We are offering a very good, comprehensive plan that we hope Governor Evers will work with us on, hopefully sign the legislation that we’re going to advance, but most importantly focus on the areas that actually need improvement as opposed to just growing the size of government,” Vos said.

Vos added the bills would likely be brought to the floor for a vote in April, though they face an uphill battle to avoid the governor’s veto pen. Republicans said if that happens, settling the issue in court is an option on the table.

The Republican news conference took place at The Packing House Restaurant on Milwaukee’s south side. The restaurant has been a community staple for nearly five decade but the operators said they had never seen anything affect business like the pandemic.

“One of my dad’s famous quotes was ‘one of the most expensive pieces of equipment in a restaurant is an empty seat’ and we’ve seen a lot of empty seats,” Chris Wiken told CBS 58. Wiken is the general manager of the restaurant that was started by his parents 47 years ago. He is also the chair of the board of directors for the Wisconsin Restaurant Association.

Wiken hopes politicians put differences aside to help small businesses like his family’s.