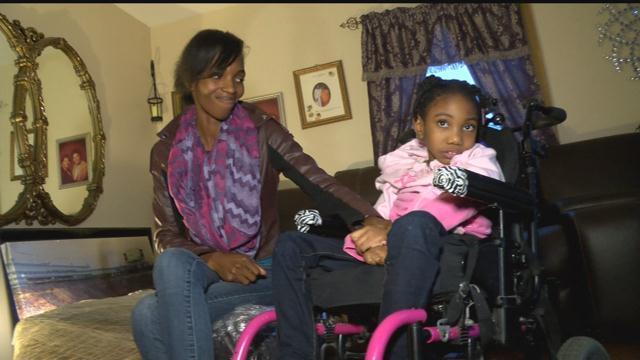 A Milwaukee woman is feeling the Christmas spirit after a Grinch nearly ruined the holiday for her and her daughter.

On Friday, Brittany Robertson's car was stolen, along with her daughter Amor's wheelchair, which was in the trunk. Without it, Amor can't get around her home and can't go to school. But Monday, the story took a turn for the better.

"It makes you have hope again that good people are still out there; that even though this unfortunate event happened, the good outweighs the bad," said Brittany Robertson.

Roberston  is feeling better now but she had just about lost all hope Friday morning when her car was taken right in front of her house, with her daughter's wheelchair inside. Without it, the 7-year-old can't go to school.

"Even with insurance I'm not sure that they will even cover her to have another chair, and even in the event that they do, the time frame would be
months on out," said Robertson.

The seven year old suffers from Rhett's syndrome, leaving her unable to walk and talk.

"Now her day to day routine is no longer what she's used to. And the worst part is that they took from my child," said Robertson.

Her family spent the weekend carrying her around their home, but also holding on to faith that something good would happen.

Word spread over the weekend and Robertson  says she's forever grateful to  a man from Madison who donated his daughter's old chair.

"This chair is an awesome chair, but unless we get a school bus to pick her up, I can't take the chair apart and put it in my car to get her to school.But it's definitely a good fix," said Roberston.

Even with out a car, a fix that is making Amor's life exponentially better.

"We let her sit in it and get familiar with it,  and she started laughing and that was confirmation to us that she's happy now and she understands someone was generous enough to give her a chance to go back to school," said Robertson.

Robertson actually saw and confronted the thieves on Saturday but was unable to get the car back. It's a 2013 red Hyundai Accent with damage to the rear bumper.