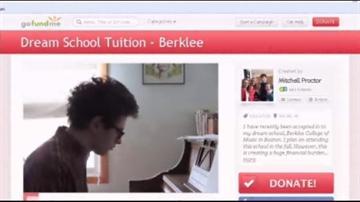 RACINE-Higher education has become a growing source of anxiety for families across the country and here in Southeast Wisconsin.

A recent high school graduate in Racine is charting a new course when it comes to paying for tuition.

He's trying to avoid a mountain of debt or the disappointment of not going to the school of his choice, by going online with a website often associated with charity or memorial funds.

Mitchell Proctor has set up his own \"Go Fund Me\" account to raise money for tuition.

The teen has the talent and the grades to make it into Berklee College of Music in Boston.

Berklee is  the largest independent college of contemporary music in the world and has some distinguished alumnae from members of \"Imagine Dragons\" to singer/songwriter John Mayer.

Proctor already passed through an extensive screening and audition process. His mother, his biggest fan of course, says the day he received the acceptance email was a source of great pride and sadness.

\"We've been saving since he was just a baby,\" Susan Proctor explained. \"We have enough to send him to a state school. But not Berk lee. It's just way out of our budget.\"

\"A lot of the people that have responded know me,\" Mitchell said of his site. \"Those that don't say they listened to my sound cloud with my music and they wanted to support the goal.\"

Go Fund Me says nationally it has more than 19,000 campaigns are currently underway attracting more than 200 thousand donors.

In Southeast Wisconsin alone there are 150 online campaigns specifically for tuition assistance.

You can check out Proctor's mission statement and music by going to: