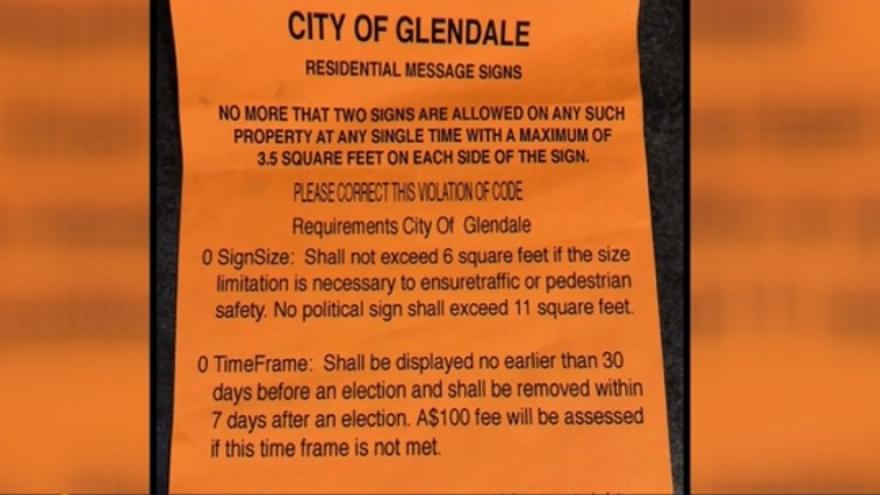 GLENDALE, Wis. (CBS 58) -- Some people living in Glendale are receiving fake citations, telling them they have too many political signs in their yards.

Glendale Mayor Bryan Kennedy says according to state laws, you can have as many political signs supporting candidates. However, a city ordinance says you can't have more than two signs that represent any other cause or purpose.

"We support what we support and we have a right, a first amendment right to express ourselves,” Resident Russ Hinz said.

He says those who are responsible for sending out fake citations recently say they have too many signs have one goal.

"Intimidate and encourage us not to express our rights to free speech,” Hinz said.

Mayor Kennedy says state law says people are legally allowed to have as many political signs on their lawns as they want to with some exceptions.

"Signs are not allowed to be in medians or right of ways. Political signage is First Amendment protected freedom of speech,” Mayor Kennedy said.

Kennedy says the reason they don't allow unlimited signs that aren't considered political such as "Black Lives Matter" and "Back the Badge" is to preserve Glendale.

"Glendale is a tree city. We're a very green city. We have some pretty strict property maintenance,” he said.

Hinz says while he is happy he can express his political opinion, he thinks the ordinance is overreaching.

"A friend of ours was in a school play and they wanted to put a school play sign in their yard they weren't able to do so. They got a citation,” Hinz said.

Mayor Kennedy says they informed residents about the "bogus letter" on Facebook and on the city's website. However, they don't know who sent out the fake notices.