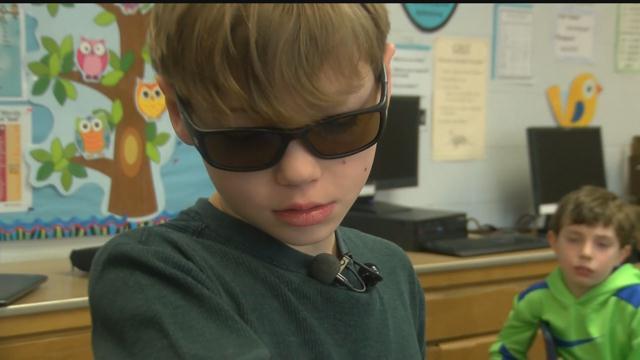 A fifth grade colorblind student got to see a little bit of color, thanks to his classmate and a company in California.

In December, 5th grade student Laine Sperry wrote a letter to EnChroma, a California-based company, whose mission it is to help the color blind see color through specialized glasses. The company was featured in the Science World magazine the class was reading.

"Our grade was wondering if you could send us a pair of EnChroma  glasses to try out," read part of the letter written by Sperry.

The company responded and 8:30 Tuesday morning Sperry opened the box.

While almost everyone in the class was interested in seeing if the glasses would help enhance their color vision, classmate Jack Albert was feeling anxious.

"My room it looks yellow to me even though it's green," Albert said.

The 5th grader is partially colorblind. He says greens and reds are the hardest colors for him to make out.

His face lit up as he put on the glasses.

EnChroma says it can take up to 10-30 minutes before the colors are seen.

While it didn’t take that long for Albert, he did say it wasn’t instant.

"It was cool like how the colors changed as I wore them more."

EnChroma says the glasses are not a cure for colorblindness, rather they do help boost and improve color vision.

But being able to test them out inside the classroom has left these fifth-graders in awe.