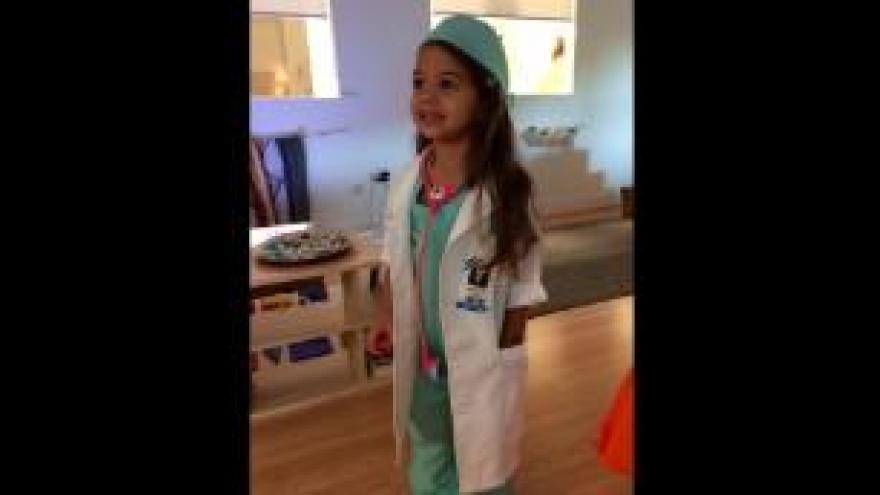 (CNN)A 4-year-old girl who nearly died because of the flu is breathing on her own for the first time in nine days and can speak to her parents after waking up from an induced coma.

"It's beyond belief," said Gemma Botelho's father, Alex. "Everyone here at the hospital -- their spirits are lifted. They said they live for moments like this because the odds were 99% against her."

And her parents have a message: Get yourself and your children vaccinated for the flu.

"I thought the flu -- you have a cough and cold and you stay home for two days," said Gemma's mother, Lejla Szabo. "It didn't cross my mind it could lead to something this serious."

At first, Gemma's flu seemed quite mild. Her parents gave her medicine to bring her slight fever down and snuggled up with her to watch cartoons and read books.

The next day, Gemma was well enough to appear in her school's Christmas play, jumping and twirling to holiday tunes.

She went to school the next two days, but then became sick again. Her hands and feet were cold to the touch, and she developed a rash.

That gut instinct saved their child's life. Tests showed she had the flu, and it had attacked her heart muscle.

Shortly after arriving at the emergency room on December 17, Gemma went into cardiac arrest. For 45 minutes doctors and nurses performed CPR, but her heart wouldn't start. Doctors and nurses filled the room, asking her parents to wait outside the door.

"We heard beeping, and then no beeping," said her mother, Lejla Szabo, a model in Miami. "She was just flatlining. We really felt that we had lost her."

Her husband, Alexander Botelho, who works in the hospitality industry, turned to her. "He told me we just had to look back and appreciate those 4½ years we had with her," she remembered.

A doctor came out and told Gemma's parents she needed to be attached to a life support machine that would do the work that her heart could no longer do. With no time to get her to the operating room, the staff moved the surgical equipment downstairs to the emergency room.

As doctors and nurses continued to pound on Gemma's chest, pediatric heart surgeon Dr. Robert Hannan performed the delicate life support operation: sliding a slender tube into Gemma's jugular vein, and another into her carotid artery, even as her body moved back and forth.

Within 12 minutes of getting the request for life support, Gemma was hooked up to the machine and out of immediate danger.

Hannan contemplated what would be best for the little girl. Sometimes a doctor's ego -- or a hospital's bottom line -- can misguide a doctor into keeping patients at their hospital instead of sending them away to get better care. But not this time.

Hannan knew Gemma might need a heart transplant, which they don't perform at Nicklaus. On Friday he boarded a helicopter with Gemma and flew to All Children's Hospital Johns Hopkins Medicine, 250 miles away in St. Petersburg. Botelho and Szabo couldn't fit on the helicopter, so they took a commercial flight, arriving at All Children's shortly before their daughter did.

When Gemma arrived, dozens of staffers, from Nicklaus and All Children's, crowded around her inside the new hospital for transition.

Friday and Saturday Gemma's heart quivered uselessly. Doctors prepared to put her on a list for a new heart but there were no guarantees it would arrive in time to save Gemma's life. "They said we'll have to wait and see," Szabo remembered.

On the Sunday before Christmas, as their daughter lay in intensive care, Szabo, who is from Hungary, and Botelho, who's from Brazil, organized friends to say prayers for Gemma at Catholic Masses in their home countries as well as in Argentina, Italy, Miami and Boston.

Two days later, her heart was working well enough that her pediatric heart surgeon, Dr. Jeffrey Jacobs, and his team at All Children's Hospital removed her from life support.

"When an adorable little girl recovers from a near death experience, it reminds all of us of why we do what we do," Jacobs said.

The heart surgeon said he can't explain what caused her heart to start again.

"Sometimes we don't understand everything that happens in medicine," said Jacobs, director of the Johns Hopkins All Children's Heart Institute.

Gemma's parents think it was the prayers, and excellent and timely medical care at Nicklaus and All Children's.

They knew they'd been lucky. If they'd taken her to the pediatrician, Gemma would be dead. Not knowing her heart was in trouble, they almost took her to a hospital that didn't have a pediatric heart program like the one at Nicklaus, which has special children's cardiac equipment and expertise.

Grateful that their daughter is alive, Gemma's parents have one message for other parents: Get your child a flu shot.

"That feeling of losing your child right in front of you -- I don't want to feel that way again -- or anyone else," Szabo said.

Every year, some 20,000 children under age 5 are hospitalized with complications from the flu. In the 2012-2013 flu season, 171 children died of the virus. A study showed that 90% of them had not been vaccinated.

"It's not too late to get vaccinated for this season," said Dr. William Schaffner, a professor of preventive medicine at Vanderbilt University School of Medicine. "It would be the best holiday gift you could give yourself and everyone around you."

If a child does get the flu, pediatricians say there can be several warning signs that the virus is taking a turn for the worse. Some children, like Gemma, develop a rash or cold hands and feet, or feel better and then get worse. Other children have difficulty breathing.

But perhaps the most important thing parents can do is trust their gut: If something just doesn't seem right, get help.

"The way she spoke to us, how she was trying to say something was wrong, she never spoke to us in that tone before," Botelho remembered. "The helplessness in her face; that was meaningful."

The doctors don't think she has brain damage, but they're not completely sure because 45 minutes is a long time to be on CPR, and her brain might have been deprived of oxygen.

But Jacobs is hopeful about Gemma's future.

"I think she's going to make a great recovery," he said. "A month from now this is going to be a little bump in the road."

Hannan, the surgeon who operated on Gemma in Miami, agreed.

"I'm so grateful for the care she received at All Children's and the power of prayer and family," he said.