Giant inflatable pumpkin about to open at State Fair Park 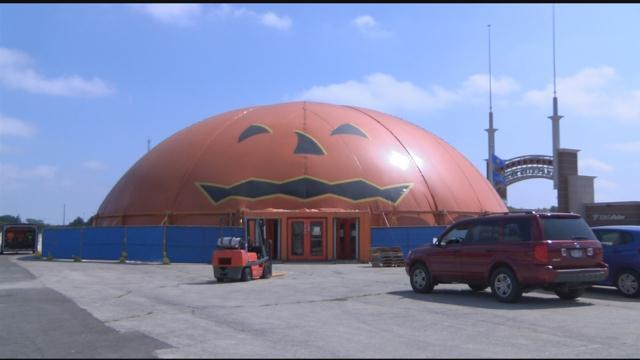 You know Fall is around the corner when  the great pumpkin at State Fair Park shows up. Halloween Express will soon open the inflatable store after a bit of a struggle last season.

Workers at the Halloween store already began filling up the giant store to get business going.

\"It's 12 months of work for 2 months of income but we love it,\" said John Majdoch, who owns 6 of these stores in the Greater Milwaukee area.

The location at State Fair Park is one of his favorites due to it's location and convenient access from the freeway.

However, last year, business was slow due to construction.

\"The DOT doing their construction project had to close all the exits off 84th street... then Bluemound was closed, so almost every way you would try to get to the pumpkin at state fair was blocked,\" Majdoch said.

He decided to start a campaign to save his business. They started a hashtag that said #Savethepumpkin and got a great response from the community.

He realized then, changing locations during construction was not the solution. Now, a year later, the ramps are back open and things are looking up.

\"This year, I expect it to be an awesome Halloween! It's falling on a Saturday, which is the holy grail of Halloween,\" Majdoch said.

The store at State Fair Park opens is expected to open on September 10th.