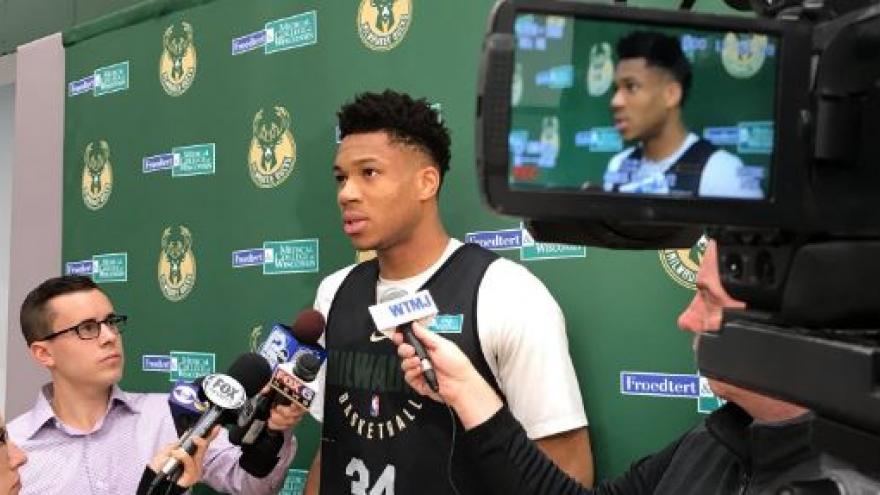 MILWAUKEE (AP) — Giannis Antetokounmpo grew from a reed-thin, inexperienced teenager into one of the NBA's dominant players under the tutelage of coach Jason Kidd, whom the Milwaukee Bucks fired earlier in the week with the team mired in mediocrity despite high expectations.

Kidd's abrupt and surprising dismissal Monday has taken an emotional toll on the All-Star forward, affectionately known as the "Greek Freak."

"He's a big part of my success in the league," Antetokounmpo said after Wednesday's practice in his first public comments since the coaching change. "I'm loyal to the people I work with. I love him as a person. I care about him as a person."

Informed by Bucks' management of the planned firing even before Kidd learned his fate, Antetokounmpo called his soon-to-be ex-coach to break the news.

"It was one of the toughest calls I had to make," he said. "We are going to miss him."

Joe Prunty, a member of Kidd's staff, has been named interim coach for the remainder of the season. He directed the team to a 109-105 win over Phoenix on Monday, just hours after taking over the team.

Kidd became Milwaukee's coach a few months after a group led by co-owners Wes Edens and Mark Lasry bought the team in April 2014. The Bucks traded two future second-round draft picks to the Brooklyn Nets, where Kidd had been coach, as compensation. He inherited a team that won 15 games in 2013-14. Under Kidd, the Bucks had a regular-season record of 139-152.

Asked whether he believed Kidd should have been fired, Antetokounmpo, who reportedly offered to go to the team's owners to try to save Kidd's job, said: "It's in the front office's hands. Whatever they can do to make this team a championship level team, it can happen. If it's me being traded, or the coach being fired."

Kidd is the second coach to be fired since the Bucks selected Antetokounmpo with the 15th overall pick in the 2013 draft. Antetokounpmo played one season under Larry Drew, who was dismissed in June 2014.

"I was only 18," Antetokoummpo said. "I didn't even know how the NBA worked. (Kidd's firing) hurts a little bit more because he was here for 3 1/2 years. He trusted me. He put the ball in my hands. He pushed me to be great."

Antetokounmpo is expected to return to action when the Bucks take on Brooklyn in Milwaukee on Friday. He sat out the past two games as he continues to manage chronic pain in his right knee.

Prunty said his players "gave good energy" in the first full practice since he took the reins.

"These are a tough few days," Prunty said. "We need to focus on whether we are getting better."

The Bucks have said that Prunty will be considered for the permanent job after the season. The hire will be especially crucial as the Bucks prepare to move into a new arena.

"It's hard to talk about that aspect of it right now," Prunty said. "This isn't about me, especially under these circumstances."

"In times of struggle, we tend to pout and take our foot off the gas. We can't do that," Brogdon said. "He's a good coach to have when we are going through those struggles."