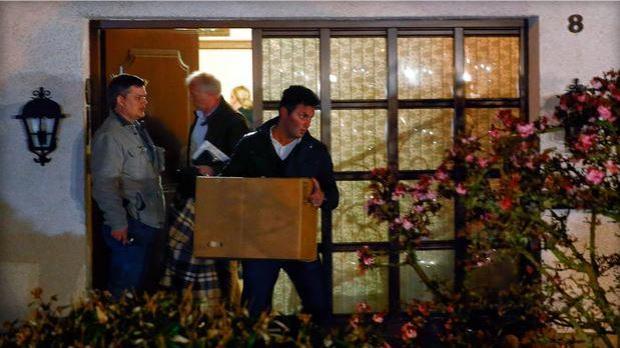 German investigators have found a medical leave note from a doctor, issued for Germanwings Flight 9525 co-pilot Andreas Lubitz, that included the day of the crash, the Dusseldorf public prosecutor's office said Friday.

That note was found Friday, when German investigators searched two homes linked to the Germanwings co-pilot accused of intentionally setting a plane on a fatal descent in the French Alps.

During their search, authorities took several objects and papers that may be evidence that will reveal more information on why Andreas Lubitz \"deliberately\" flew the plane into the mountainside, German police said.

Authorities searched the Lubitz family home in Montabaur and his apartment in Dusseldorf.

Objects taken will be examined, \"which might lead to more information,\" said Marcel Siebig of Dusseldorf police.

Marseille prosecutor Brice Robin, who is overseeing the criminal investigation into the crash in France, said the documents would be handed to French authorities.

Two French police officers are on their way to collect the evidence from German authorities, he said.

A day after Robin revealed that cockpit audio showed that Lubitz wanted to destroy the plane, many chilling questions remain unanswered.

Did he plan his actions?

What drove the 27-year-old German national to do that?

Asked about news reports citing unnamed sources that queried Lubitz's mental health, a Germanwings representative told CNN the company could not go into specifics about his medical record for reasons of confidentiality.

The German Airline Pilots Association, Vereinigung Cockpit, warned in a statement against leaping to conclusions based only on a \"first glimpse,\" from the cockpit audio, into what happened on the flight deck.

\"We should not rush to conclusions based upon limited data. The reasons that led to this tragic accident will only be determined after all data sources have been thoroughly examined\" said Ilja Schulz, the group's president.

The group called for the plane's second \"black box,\" the flight data recorder, to be found and examined as soon as possible. Only once the investigation is complete should work start on new procedures to prevent another such tragedy, it said.

Amid all the questions, some answers emerged Thursday.

It's unknown whether Lubitz planned his actions, Robin said. But he \"took advantage\" of a moment in which the pilot left the cockpit and \"activated the descent,\" which can only be done intentionally.

Transponder data showed the autopilot was reprogrammed by someone in the cockpit to change the plane's altitude from 38,000 feet to 100 feet, according to Flightradar24, a website that tracks aviation data.

\"We at Lufthansa are speechless that this aircraft has been deliberately crashed by the co-pilot,\" said Carsten Spohr, CEO of Lufthansa, which owns Germanwings.

The plane's cockpit audio recorder captured horrific sounds. The captain, who was locked out of the cockpit, banged on the door to be allowed in, the prosecutor said.

Lubitz's breathing was steady, with no sign that he had a heart attack or other medical issue.

Scared passengers can be heard screaming on the audio recording for the final few moments of the flight.

Early in the flight, the pilot and co-pilot had normal exchanges, Robin said. When the pilot stepped out, presumably to go to the bathroom, he asked Lubitz to take over.

It's unclear whether the pilot entered a code to try to get back into the cockpit when he returned, or whether Lubitz \"put the lever on lock,\" which would have prevented the code from working, Spohr said.

The most plausible explanation is that Lubitz, \"through deliberate abstention, refused to open the cabin door ... to the chief pilot, and used the button\" to cause the plane to lose altitude, Robin said.

If a person kills himself and 149 others, the word \"suicide\" should be replaced with another word, Spohr said.

Officials said Lubitz was not known to be on any terrorism list, and his religion was not immediately known.

Once found, the flight data recorder could shed more light on the plane's final minutes.

The French government has asked the FBI to help investigate the crash, a law enforcement official said.

Germanwings said the plane reached its cruising altitude of 38,000 feet, and then dropped for about eight minutes.

The plane lost contact with French radar at a height of about 6,000 feet. Then it crashed.

The 144 passengers and six crew members came from 18 countries. About half were from Germany, and 49 were from Spain, according to Spain's Security Secretary Francisco Martinez.

No psychological testing after hiring

Lubitz had trained at the Lufthansa flight center in Bremen, Germany. He had been with Germanwings since September 2013 and had completed 630 hours of flight time, the company said.

He only had about 100 hours of experience on the type of aircraft he was flying, but he had all the necessary certifications and qualifications to pilot the aircraft alone, the prosecutor said.

Lufthansa does not have standard psychological testing for pilots once they are hired, Spohr said. The company considers an applicant's psychological state when hiring, he said.

The co-pilot was \"fully qualified to pilot the aircraft on his own,\" Robin said.

Relatives and friends of the victims traveled on special Lufthansa flights to an area near the site where their loved ones perished.

They held prayers in Seyne-les-Alpes, a nearby village serving as a staging post for the recovery operation. Flowers and pictures sat on the ground, candles flickering in the cold air Thursday night.

Lufthansa is providing \"financial support\" to relatives of the victims, Spohr said. He declined to go into details.

Germanwings said Thursday it was setting up a family assistance center in Marseille, with family briefings to start Saturday. Another flight carrying victims' relatives is due to arrive in Marseille from Barcelona on Friday.

\"Our focus in these darkest hours is to provide psychological assistance to the families and friends of the victims,\" said Thomas Winkelmann, a spokesman for the Germanwings executive board.

Representatives of the local authority for Barcelona and the Red Cross told CNN that all 68 Spanish relatives who came to France on Thursday were on their way back to Barcelona.

Spanish relatives have been told that once the bodies are recovered, they will be sent to Paris for experts to start the DNA identification process.

The families of the two pilots are also in France, Robin said, but they are not in the same place as the passengers' relatives.

The bodies of the crash victims will not be released to family members until all DNA identification work has been done -- a process likely to last several weeks, he said.

While some human remains have been recovered, many have not. The task is treacherous for search crews working on steep slopes in icy weather. Workers were dropped by helicopters and tied together for safety.