Germantown woman reunited with her rescuer 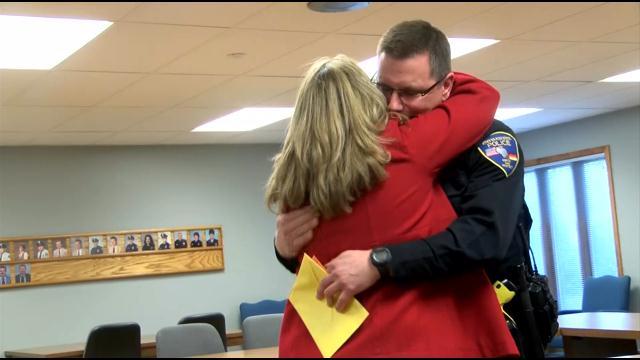 There was an emotional meeting here at the Germantown police department as an officer met the woman he rescued for the first time.

\"Thank you just ain't enough,\" said Crystal Lauer, the woman who almost lost her life on a cold February night this year.

Lauer is alive and well today and she says she's got Officer Jeff Gonzalez to thank for that.

\"I wouldn't be here talking if it wasn't for him and JohnBoy,\" Lauer said.

JohnBoy is her loyal lab.

On the freezing cold night of Feb 13th, JohnBoy ran into the street, catching the attention of Officer Gonzalez.

\"He initially barked and I thought oh he doesn't want anything to do with me. But I started talking to him and he looked friendlier than most,\" said Gonzalez.

JohnBoy led Gonzales to his owner who had was passed out in a chair in front of her home and had been for hours.

\"I sat down, threw the ball and that's the last I remember 'til i was in the hospital,\" said Lauer.

\"I didn't think it was going to go well when I first saw her,\" said Gonzalez.

Thanks to the officer's quick thinking Lauer was rushed to the hospital. She has heart problems and they caused her to pass out unexpectedly.

She says she can joke about it, now that she's on the road to recovery..

\"If I fall asleep and pass out now at least it's warmer so I'll be ok,\" said Lauer.

And JohnBoy is with her every step of the way

\"He was spoiled before and now he gets anything he wants,\" she said.

\"He sleeps with me and he actually takes half my hip now that this all happened he flops and falls right on ya because he cant get close enough,\" said Lauer.

Her family says they're keeping tabs on their mom but she's got another watchful eye too.

\"Now that I know how her house is oriented when I drive by I look that way,\" said Gonzalez.

The family says they plan on keeping in close contact with Officer Gonzales, and have even invited him over for dinner.