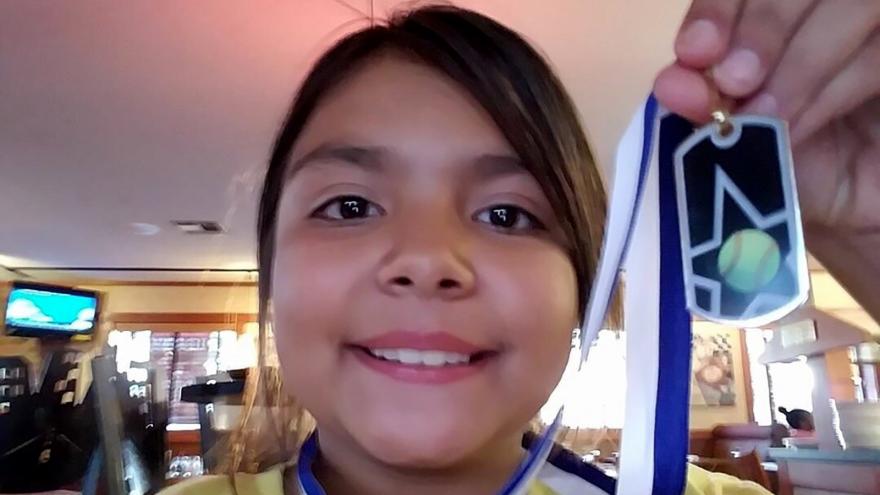 ATLANTA (CBSNews) -- By all accounts, Sarah Radney was safe inside her grandparents' home when Hurricane Michael roared into southwest Georgia. If the family feared anything, it was probably falling trees - not a carport next to the house.

In what could only be described as a freak accident, authorities say Michael's powerful winds lifted the portable structure high into the air and slammed it back down on the house. When it landed, one of the legs tore through the roof, fatally striking the 11-year-old girl in the head.

Michael dropped from a Category 4 hurricane to a Category 1 as it arrived in Georgia, and later weakened to a tropical storm. Still, it caused havoc in parts of the state, spinning off tornadoes and leaving downed trees, damaged buildings and power outages behind as it marched toward the Carolinas.

Sarah had the week off from school for fall break and she and her 12-year-old brother had been staying at their grandparents' house near a lake in Seminole County since Monday. They were supposed to return home Thursday morning.

At home in Cairo about 45 miles away, Sarah's father and stepmother, Roy and Amber Radney, kept in touch with her grandparents through frequent phone calls as the storm winds gusted around them.

Roy Radney was outside Wednesday evening when the call came that something had come through the roof and hit Sarah and his mother. Sarah had been struck in the face, couldn't breathe and quickly fell unconscious.

About 45 minutes later, Amber Radney called her father-in-law and learned Sarah was gone.

Emergency responders weren't able to reach the home until after midnight because power lines and trees blocked the roads. When they finally made it, they took Sarah's grandmother to a hospital, where she was treated for a punctured lung, a broken rib and flesh wounds, Amber Radney said.

The youngest of four until her father remarried and had two more daughters, Sarah loved being around her big family and made everything more fun, Roy and Amber Radney said in phone interviews with The Associated Press on Thursday.

"We couldn't ever get her to spend the night nowhere because she always wanted to be home with her family," Roy Radney said. "She was 11 years old, but she liked to have fun like a 5-year-old."

Sarah loved to perform, her father said. When she started sixth grade this year, she began playing the trumpet in the school band and had recently been in a play with the drama club.

Amber Radney said one of her favorite memories is of making a video of Sarah dancing to Outkast's "Hey Ya!" in a park about two years ago.

"She was so beautiful and she smiled so much that day," Amber Radney said. "She lit up everything."

Other parts of Georgia also were hit hard by the storm. National Weather Service meteorologist Ryan Willis said there were two confirmed tornado touchdowns in the state. CBS Atlanta reports that an EF-0 tornado touched down in Atlanta Wednesday and an EF-1 tornado also touched down in Roberta, about 80 miles southeast of Atlanta.

Willis said the Atlanta-area tornado was an EF0, the lowest intensity rating for a tornado, with sustained winds of 65 to 85 mph. The damage there consisted mostly of fallen trees.

Willis said that a team was still working in Crawford County to assess the damage and intensity of the tornado.

In Roberta, in Crawford County, Hill Bentley said he saw spinning clouds that looked like a tornado Wednesday.

"I told my wife, Judy, 'Come on out, you want to see what a tornado looks like?'"

Bentley's home wasn't hit, but his friend Bradley Lewis wasn't so lucky. Dozens of fallen pines littered Lewis' front and back yards, and his roof and back porch were damaged. Luckily, he was not injured.

"Kaboom! Like the world moved or something," Lewis said of the moment when the trees snapped while he sheltered inside.