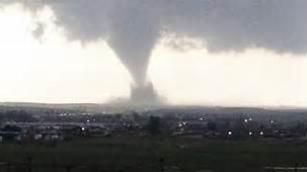 A new study reveals El Nino and La Nina conditions can help predict the amount of tornadoes and hail events in a severe weather season.

The El Nino-Southern Oscillation, or ENSO, occurs when the sea-surface temperatures in the equatorial Pacific Ocean fluctuate.  When waters are warmer than normal, it's described as El Nino.  The opposite is La Nina. During this pattern, both vertical wind shear and surface warmth and moisture increase significantly.  This can lead to severe storm occurrence.

The research shows moderately strong La Nina events lead to more tornadoes and hail storms over portions of Oklahoma, Texas, Kansas and other parts of the southern U.S. It's the direct opposite with El Nino.

It's estimated hail storms and tornadoes cause an average of $1.6 billion in insured losses each year in our country.

Despite the research, the scientists are quick to point out ENSO is not the only driver of severe weather.  Also, the current study shows a strong correlation only in the southern states.