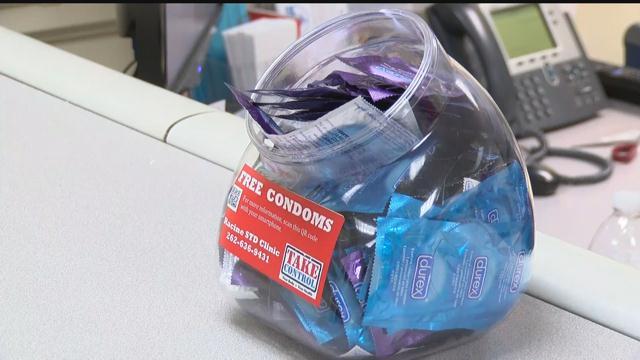 In Racine, the Health Department has been trying different strategies to reduce the transmission of sexually transmitted diseases. Last summer, condoms were put in bars, barber shops and tattoo parlors..and it's now even easier to get contraceptives.

Officials tell us Racine has some of the highest STD rates in the state and that's why they're getting aggressive, bringing condoms right to the people who need them and starting Friday even sending them in the mail.

"I think its a great idea and everyone should have one," said Racine resident Teri Orno.

"Maybe you're not in a convenient place to purchase contraceptives so its an easy responsible option for the community," said Nicholas Pond.

Its as easy as opening your mailbox.

The Racine Health Department says they want to make safe sex as easy as possible; all you have to do is go to their website.

"You put in your name and address and we ask for a current age, if there's a latex allergy, your gender," said Bobbi Fergus with the Racine Health Department.

And if you're over 14 years old-you'll get this discreet package  in the mail, filled with contraceptives.

"Thought we'd expand that and see if we could get some of the youth and young adults who can't make it in during our business hours," said Fergus.

But officials say this is about more than just receiving free condoms in the mail. It's about sending people to the health department.

"For the last five years on average we've seen 750 cases of chlamydia in Racine and 170 cases of gonorrhea. We're hoping that mature people applying to get the packages mailed to them will be using them, protecting themselves and decreasing the rate of STD's," said Fergus.

And the Racinians we spoke with, surprised to hear those stats, are all in.
"Please use a condom...I had no idea," said Orno.

"I think it's a good thing. Make it easier for them to receive what they need to be safe," said Joel Hyduke.

The health department says none of this is coming out of taxpayer's pockets; its coming from a grant specifically given to Racine to eliminate STD's.

Here's a link to the website to request condoms: http://cityofracine.org/health/condoms/