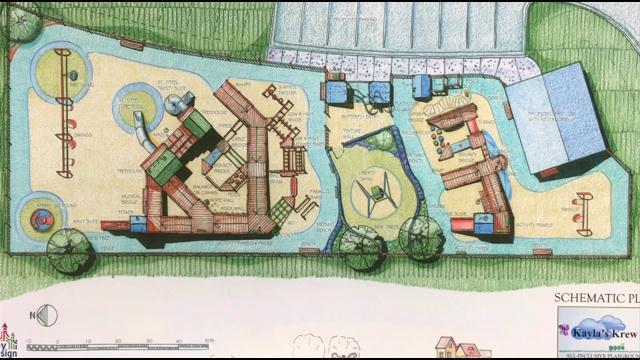 Plans for a new all inclusive park in the Milwaukee area are moving forward. That momentum comes as the result of the dedication of a Franklin mother.

She still can't quite believe it herself. A vision her family has shared for the last few years is about to become a reality. That new reality honors her daughter Kayla, who lost her life-long battle with cerebral palsy in 2012. The City of Franklin will build a place Kayla, or "KK," would have enjoyed playing at with her own friends.

Though Kayla was unable to speak, she was widely known among her family and friends as having a lot of personality. That is a true testament to a little girl who constantly broke down the expectations and status quo of someone who finds them self bound to a wheelchair and unable to use her own voice.

Despite that obstacle, she found ways to do things in her own way for herself. The planned park is yet another extension of Kayla's ability to accomplish so much, whether she is still her or not.

Franklin Mayor Steve Olson proudly shared, "It's a creative and totally flexible, all inclusive park for children of all ages, and all abilities."

"It's amazing what happens when you put [people of] all abilities together," Runte said.

Runte has seen what happens when that 'coming together' takes place. Life lessons are taught, that can only be learned through giving children a way to connect at the most basic of levels; through playing together.

More than a year ago we learned about the butterfly clips that Runte, and her family and friends, put together. They're worn by the kids at Ben Franklin Elementary, and are now a popular accessory all over the community and beyond.

Those butterflies are a way to pay tribute to Kayla, and her park, by raising money. Those fundraising efforts are close to paying off.

Once the Franklin Common Council learned about the Runte family's efforts, they quickly got on board. That is due, in part, because Kayla still has a guiding hand involved in the project that was temporarily put on hold before she passed away.

Franklin Alderwoman Susanne Mayer smiled when she said, "I know she's [Kayla] looking down on this and blessing it, and having little angels all over this thing."

Runte also shared a similar sentiment when she said, "For her [Kayla] to sit back or view from the air, from Heaven, and say 'wow,' you know? The opportunity to bring all abilities together; this is really really special.'"

Recently Runte unrolled the plans to the new park for the first time. That play space will feature a swing that allows, for anyone in a wheelchair, to roll onto the swing and use it. It is called a 'liberty swing.'

"We had volunteers go in and brainstorm with over 1,800 students [from Franklin schools], gathering ideas across the board," said Runte. "We took all of those ideas and shared them with the designer."

Those ideas inspired this vision by designer Dennis Wille... And that now leaves just one more thing to do; construct it. The plan is to stretch it out with a community build over six days in September of 2015.

"I think the six-day build is what's intended," said Olson. "I think it will be done in two days."

"This seems like a no-brainer," added Mayer. "This is so fun. It's care-free, and obvious. And I don't know of anyone who wouldn't want to be involved with this project."

Bringing the park to reality has certainly been a labor of love. It is one that Runte said she could not have down without her husband John and daughter Brook.

"Very supportive," Runte said of her family. "Sometimes dinner is not on the table. [Laughs] Or the house is full of butterflies, because people are coming over to help out in making the butterflies."

In the end... one simple thing has made this all possible.

"The love of a mother for a child," Olson pointed out. After a moment he added, "And Shelly's desire to spread that out, and take care of other kids. That was great."

So far 'Kayla's Krew' has raised about $190,000, and have multiple fundraising events coming up. You can find out more about them by clicking here.

The Runte family and the community of Franklin are making Milwaukee Great.