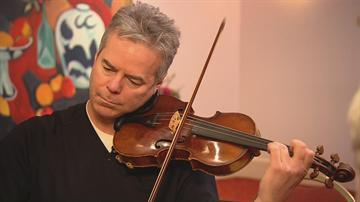 MILWAUKEE-Frank Almond arrived back in Milwaukee Friday and is speaking out for the first time since he was robbed of his Stradivarius Violin valued at $5 million.

He played the violin for the camera to show it was intact and sounded as beautiful as ever.

Almond was struck with a taser as he left a concert at Wisconsin Lutheran College on January 27th.

Two men are now under arrest, and the violin was found in a suitcase hidden in an attic in a home in the Bayview section of Milwaukee.

When recalling the night he was robbed Almond said at first he thought his attackers were there to pick up somebody.

When he saw the flash of the stun gun, he knew it was far more serious.

\"I don't know what usually happens with a taser,\" Almond said Friday, \"but I was up pretty quickly. I was screaming when I was hit because it's painful but I got up just in time to see the van pull away and the violin was gone.\"

Almond says it was like losing a child. He said he followed specific protocol of never separating from the violin to prevent a thief from snatching it, but a violent attack is something he never anticipated.

\"Yes I could have an armed guard, or be handcuffed to the instrument. But thaI would be real conspicuous and draw attention to the fact that I have something of value.\"

Almond was in Florida when he got the call from Police Chief Flynn that the violin had been recovered.

\"For the first time in my life I was speechless,\" Almond recalls.

Almond is now preparing for a Monday concert, 7 p.m. at the Sharon Lynn Wilson Center for the Arts in Brookfield.

Does he think he's a marked man?

\"There would be nothing stupider than stealing another stad,\" Almond declared.

But he acknowledged that all violinists are probably a little skittish now.