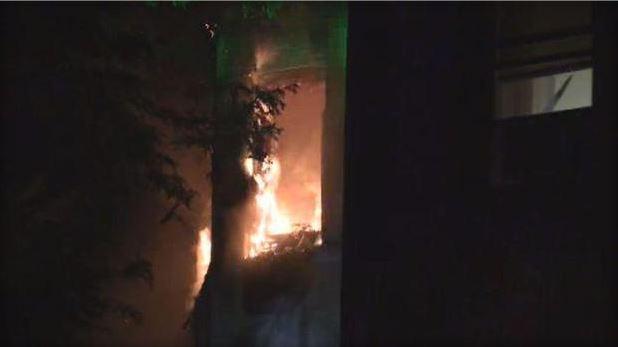 (CBSNews) CHICAGO — Four people were killed, including a 3-month-old baby, in an extra-alarm fire early Tuesday in the South Chicago neighborhood.

The fire started around 1:40 a.m. in a three-story apartment building, reports CBS Chicago.

One witness said he tried to get his own ladder to help people trapped on the third floor, but before he knew it, a man jumped from a window with the baby in his arms. The infant later was taken to Comer Children’s Hospital, and was pronounced dead.

Three other people were injured in the fire.

The man who jumped from the window, likely the baby’s father, was taken to the burn unit at Stroger Hospital, where he was in critical condition. Two other people were taken to South Shore Hospital; one in fair-to-serious condition, and the other in good condition.

Firefighters extinguished the blaze at around 4:30 a.m., and initially said three people were unaccounted for — including two sisters, ages 4 and 7, and an adult. Shortly before 7:30 a.m., a Fire Department official confirmed three bodies were found inside the home.

The missing girls’ aunt said they were with their father when the fire started.

“Their daddy’s in the hospital, burned severely,” Charmaine Staples said.

A woman who lived in the garden-level apartment where the fire started said a man who had been harassing her for money intentionally set her back porch on fire.

“He was at my back door. He was the only one at my back door, and when I closed my door in his face and told him I ain’t have nothing for him, he was kicking and beating and banging at my door, and I ignored him, and I went in my bedroom. When I went in my bedroom, I got on the phone. Next thing I know, the dog’s barking, and I get up to go see why my dog’s barking. At this point in time, I didn’t even see no flames yet,” Latoya Terry said.

However, police have said it’s too soon to determine if the fire was the result of arson.