Foul play suspected in disappearances of 4 men in Pennsylvania 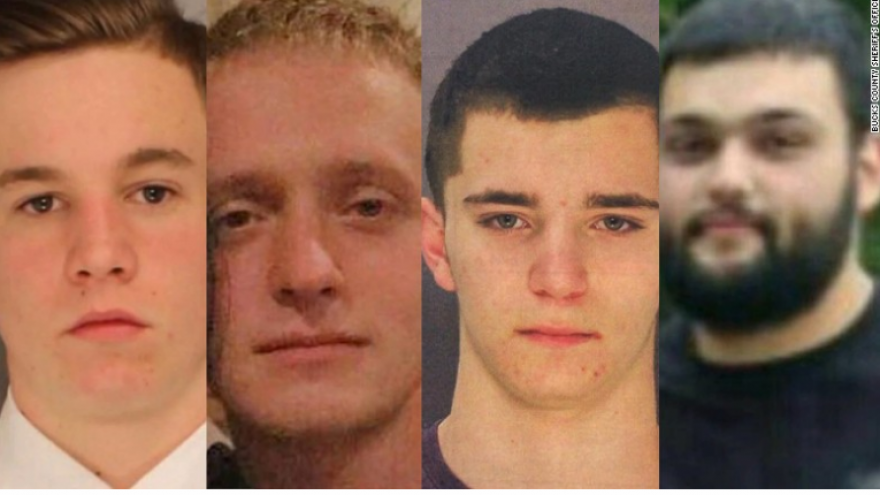 BUCKS COUNTY, Pa. -- Authorities in suburban Philadelphia have named a person of interest in the disappearance of four young men who vanished within days of each other last week.

The missing men have been identified as Mark Sturgis, 22, of Pennsburg; Tom Meo, 21, of Plumstead; Dean Finocchiaro, 18, of Middletown; and Jimi Tar Patrick, 19, of Newtown Township. Patrick disappeared on Wednesday, and the three others on Friday. Investigators fear foul play is involved in the disappearances, and say they're investigating how the four men know each other.

Bucks County District Attorney Matthew Weintraub said 20-year-old Cosmo DiNardo was re-arrested on an unrelated gun charge Monday because he has become more of a flight risk. DiNardo is being held on $1 million bail over a charge that he illegally possessed a shotgun after a mental health commitment. The charge dates back to February, reports CBS Philly.

Weintraub said Tuesday DiNardo is considered a person of interest in the disappearances. Weintraub also confirmed DiNardo is the son of the owners of a Solebury Township property investigators have been combing over "with the equivalent of a fine-toothed comb."

But Weintraub cautioned that "sometimes that chasm between person of interest and person accused, arrested or certainly convicted is so wide we never cross it." He said DiNardo "may or may not be" a part of the investigation in days to come. He urged anyone with information about how the four missing men are connected to each other or to DiNardo to come forward.

"I can't say that there is that type of information, but if there is, I beg of you to please give it to us and let us run it down," he said.

Neither DiNardo's lawyer nor his parents have returned calls for comment from the Associated Press.

Investigators are chasing fast-developing leads in the search for the men, but say that it could take days despite intense efforts centered on the large swath of farmland about 30 miles north of Philadelphia. Weintraub would not say exactly what led authorities there, but on Monday called leads in the case "incredibly hot" and "very fruitful."

Weintraub confirmed Tuesday the Solebury Township property is the main search site, though other locations have been searched as well. Investigators also searched a property in Bensalem that the DiNardo family owns, CBS Philly reports.

Weintraub stressed no human remains have been found in the search. Monday, he said investigators aren't sure what they'll find.

Two of the missing men, Sturgis and Meo, are longtime friends who work in construction for Sturgis' father, Mark Potash. Finocchiaro is a mutual friend of theirs, Potash told The Associated Press.

Sturgis and Meo were last seen together Friday night in the Doylestown area. Finocchiaro has been arrested multiple times on charges that include drug possession, driving under the influence and assault.

Potash said he did not know where his son was heading or what he was doing before he disappeared Friday.

The FBI is involved in the search.