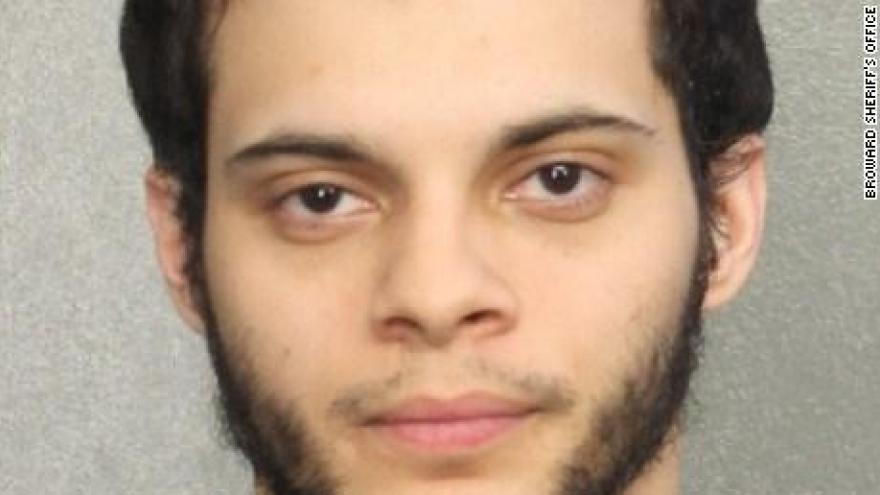 (CNN) The suspected Fort Lauderdale airport shooter faces three federal charges that each carry the possibility of the death penalty, the US Department of Justice said Saturday. Esteban Santiago faces charges of performing an act of violence against a person at an airport serving international civil aviation that caused serious bodily injury; using and carrying a firearm during and in relation to a crime of violence; and causing the death of a person through the use of a firearm.

When Esteban Santiago was in an Alaska FBI office in November, saying his mind was being controlled by US intelligence, he left two things in the car.

A gun and his newborn child.

Santiago's rambling walk-in interview at the Anchorage office was concerning enough for authorities to take away his gun and order a mental health evaluation. But it wasn't enough to get him mentally adjudicated, which would have prohibited Santiago from owning a gun.

"As far as I know, this is not somebody that would have been prohibited based on the information that (authorities in Alaska) have. I think that law enforcement acted within the laws that they have," said US attorney Karen Loeffler.

Santiago got the gun back a month later when he retrieved the pistol from police headquarters, and it was that weapon, law enforcement sources told CNN, that he used to shoot 13 people Friday at the airport in Fort Lauderdale, Florida.

Santiago also had some legal trouble and was due in court again in March. But he hadn't been convicted of a serious crime.

Here is what we know about the shooter, the victims and the facts of the case:

Who is Esteban Santiago?

Law enforcement officials have identified Santiago, 26, as the suspect in the five deaths at Fort Lauderdale-Hollywood International Airport.

Investigators believe he was planning to carry out his attack for some time, law enforcement officials told CNN on Saturday.

Santiago recently began selling his possessions, including his car, and friends and associates noticed more erratic behavior, investigators have learned from interviews with those who know him.

Authorities are examining writings, including online posts, that in retrospect appear to indicate some period of planning, law enforcement officials said.

Esteban lived in Alaska, where he was a security guard.

Santiago didn't resist when he was taken into custody, Broward County Sheriff Scott Israel said. According to his booking information, Santiago is being held without bond on a murder charge.

Alaska was also the site of his last military assignment. He was a member of the Alaska Army National Guard from November 2014 until August, when he was discharged for unsatisfactory performance, a spokeswoman for the guard said.

In January 2016, Santiago was arrested and charged with assault and criminal mischief after an argument with his girlfriend in Anchorage, according to court documents that CNN obtained.

At the time, Santiago allegedly yelled at his girlfriend while she was in the bathroom, according to the complaint. He then broke down the bathroom door.

The woman told investigators that Santiago strangled her and struck her in the side of the head, the complaint said. Santiago left before police arrived.

Anchorage municipal prosecutor Seneca Theno said Santiago pleaded no contest to criminal mischief and assault charges. Under a deferred prosecution agreement, the charges would have been dismissed if he complied with the conditions. He was due back in court on March 28.

The military said Santiago's nine years of service in the National Guard included one 10-month tour of Iraq, where he was awarded a combat action badge.

Santiago returned from Iraq a changed man, his aunt told CNN on Saturday.

"His mind was not right," the aunt, Maria Ruiz Rivera, said in a phone interview in Spanish from her home in New Jersey. "He seemed normal at times, but other times he seemed lost. He changed."

She added, "He talked about all the destruction and the killing of children. He had visions all the time."

Ruiz said she lost contact with Santiago several months ago.

"He stopped calling," she said. "He wouldn't respond to my messages. I would call and text. He seemed distant."

Her family is still in shock, she said.

"Who would have imagined that he could do something like this?" she said. "I don't say that because we're family. I say it because he wasn't like that."

The suspect's brother, Bryan Santiago, said he believes the shooting rampage resulted from mental issues that surfaced after the Iraq tour.

Esteban Santiago requested medical help from army and federal agencies, according to his brother. He received some treatment.

Bryan Santiago, in an interview in Peñuelas, Puerto Rico, said he used to speak with his brother regularly but the communication ceased about a month ago.

How did he get to Fort Lauderdale?

George Piro, the FBI's special agent in charge in Miami, said Santiago flew from Anchorage to Minneapolis to Fort Lauderdale on a Delta Air Lines flight.

A lieutenant with the Anchorage airport police said Santiago had one bag -- a handgun case with a pistol inside that he checked.

Authorities do not know why Santiago was in Fort Lauderdale.

But Piro said Saturday that Santiago "came here specifically to carry out this horrific attack."

"We have not identified any triggers that would have caused this attack," he said.

Piro said investigators were looking at airport video to see how the rampage unfolded. Authorities have conducted more than 100 interviews as part of their investigation.

What was the motive?

The FBI has not ruled out terrorism, Piro said, but Israel cautioned it was early in the investigation and authorities did not know Santiago's motive.

Saturday, Piro said investigators "continue to look at the terrorism angle" as a possible motive.

"We have not ruled out anything," he said. "We continue to look at all avenues, all motives."

Piro said Santiago was cooperating with investigators, who interviewed him for several hours. The interview concluded early Saturday.

Terry Andres of Virginia Beach, Virginia, was at the airport to begin a vacation with his wife, Ann, and a celebration for the couple -- his 63rd birthday was coming up, according to a close friend.

Andres died; his wife was uninjured, said the friend, who asked to remain anonymous.

"Terry was the kindest, sweetest and best kind of friend anyone could have. He was the ultimate family man," said the friend, who has known Andres since high school. "He and Ann were married for 40 years, and he absolutely adored his children and grandchildren."

Another victim was Olga Woltering, 84, who was traveling with her husband, Ralph. They were on their way from their home outside Atlanta for a cruise.

The great-grandmother and loyal church member died; her husband escaped serious injury, according to posts on social media.

"Olga was one of the most joyful, loving, caring and committed people I have ever met," the Rev. Fernando Molina-Restrepo of the Catholic Church of the Transfiguration in Marietta, Georgia, told CNN. The Wolterings were members of the church since 1978, the priest said.

Sara Graham, who was vacationing in Fort Lauderdale, wrote on Instagram that she and her family were about 100 feet away from the shooter.

Graham said her brother led her and her mother to safety after the commotion began.

"When we first heard the shots we had no idea what was happening until everyone started running towards exits," she wrote. "We hid for about 30 minutes and we're let back inside, under the impression it was all safe."

Then there was a rumor of another shooter and people started running again.

"Once we were outside, we had to run three more times until we were sure that we were safe," she said.

They spent the rest of Friday afternoon in an aircraft hangar before people were allowed to leave.

One man told CNN's Anderson Cooper that a laptop in a backpack he had slung over his shoulder stopped a bullet that could have killed him.

"I felt something hit my back," Steve Frappier said, adding he thought it was luggage falling off the carousel.

It was a bullet, which ricocheted off the laptop. He found it in the side pocket of his bag.

Other witnesses described the aftermath of the shooting as a "war zone" and "mass hysteria."