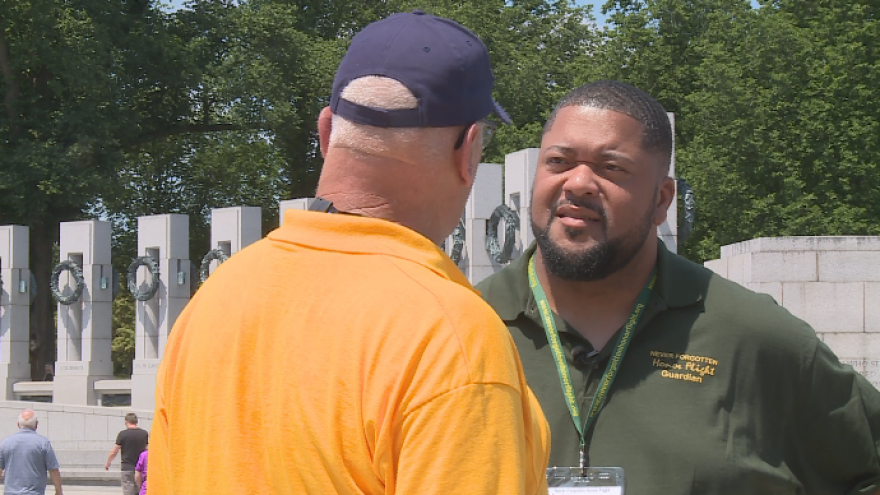 WASHINGTON (WSAW) -- From Lambeau Field to the Never Forgotten Honor Flight, former Packer Gilbert Brown has been a part of a lot of good memories.

The "Gravedigger" made several tackles on the field during his playing days, but recently began tackling a new challenge, working with a video crew that's making a Never Forgotten Honor Flight documentary and lending support to local veterans.

"This is an awesome experience. Just listening to the stories, And looking at all the monuments," Brown said. "My father served in the Navy; we as Americans need to show these guys the utmost respect."

Brown said he doesn't take the sacrifice that veterans have made for granted.

"You get to walk around free, you get to smell the air here, I mean, you just get to do so many other things that you cannot do in another country," Brown explained. "And for these guys to go out and make that happen, make it happen."

The former defensive tackle shared that being a beloved athlete for the Green and Gold may have helped him talk to veterans, to hear the stories they had to share.

"Being able to interview these guys, it lets them open up because they do feel like we have a rapport," Brown said. "Football, basketball, guys like us, we're the made up guys. We're like the comic book guys compared to these guys. They are the real life heroes and champions."

Brown said no matter where he is, he always finds time to tell a veteran how much he's thankful for their service.

"Every time I'm signing autographs or every time I'm somewhere, I stand up and shake these guys' hands. Just out of the respect for the things they have done us and paved the way for us," he said.

The former Packer only hopes that other veterans will be able to experience what has become a trip of a lifetime for many others.

"I hope to God that everyone gets a chance to do this," Brown said. "Because you do deserve it."