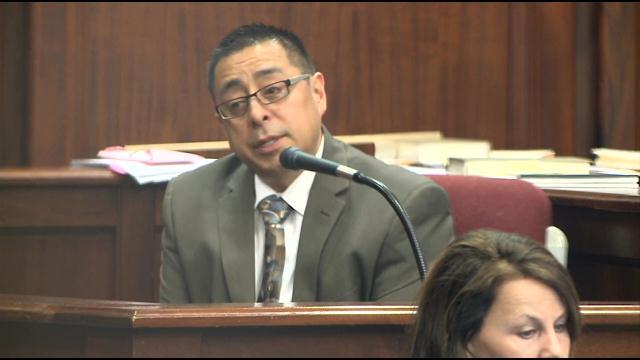 A former Milwaukee homicide detective on trial for beating a handcuffed suspect in a police interrogation room took the stand in his own defense.

Rodolfo Gomez, 48, testified in Milwaukee County court Thursday. Gomez said he had prior knowledge Deron Love was violent from past criminal history and a threatening text message to go on a killing spree. To secure the suspect, Gomez handcuffed one of Love's arms to a wall and started a video recording.

At the time of the incident in August 2013, Love was in custody for the death of his 7-month-old baby. Gomez said he tried to build a rapport with Love to get a truthful confession, but Love wasn't talking. For that reason, Gomez stated he got got blunt with his questioning, calling Love \"a cold-blooded animal.\"

Gomez told the court that's when Love started yelling, jumped up and pounded his fist on the table.

Shocked and fearful of an attack, Gomez testified he gave Love a wall stun. When that didn't subdue the suspect, Gomez said he punched him in the face with his right hand and the two struggled.

Gomez said he forgot that he handcuffed Love to the wall, but he still feared for his life. For that reason, the former detective stated his use of force was justified.

Gomez is charged with two felony counts: misconduct in office and abuse of a prisoner.

He has pleaded not guilty to both.

Love was found not guilty in the death of his baby. He has since filed a civil suit against Gomez.