Former Milwaukee Archbishop speaks at length about gays in the church 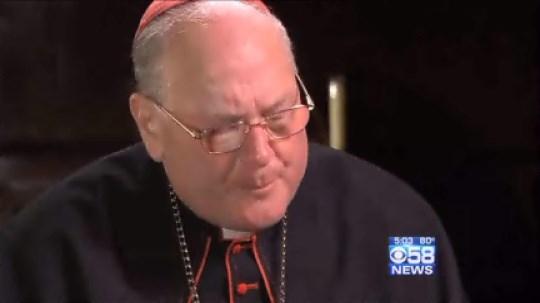 Former Milwaukee Archbishop Timothy Dolan supporting the Pope's attempt to be more inclusive of gays in the church.

He spoke from from Wednesday morning about a new document that seeks to be welcoming of homosexuals without changing Catholic doctrine on marriage.

A draft of the document put together by some 200 bishops has been viewed as a shift in teachings that have stood for years.

A final draft has yet to be submitted to Pope Francis.

Dolan, who is now Cardinal of New York and the primary spokesman for the church in North America says at the very least, this might change the perception of Catholics.

\"One of the obstacles we got today is the caricature, the stereotype that's out there of constantly being no, no! Constantly telling God's people what they can't do. They've heard me say often, we've heard Popes John Paul II, Pope Benedict and now in an extraordinarily effective way Pope Francis saying the Church isn't about no.\"

Another huge gesture is Cardinal Dolan accepting the title of Grand Marshal for the next New York St. Patrick's Parade.

For the first time, the parade is allowing a gay group to march and carry a banner.

It's something that caused the Catholic league to drop out of the parade, but not Cardinal Dolan.